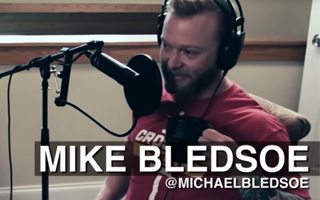 Taking a few minutes each day out of our busy schedules to relax and practice mindfulness has been proven to reduce stress and anxiety, so why is it that we all forget to do it? In this conversation Daniel talks with Mike Bledsoe about the difference between 'being' and 'doing' and how we can separate, yet also integrate the two for a more fulfilling life.

Related article from Daniel: Higher Dimensional Thinking, the End of Paradox, and a More Adequate Understanding of Reality

“Success”. At its least evolved, it’s a word connoting pride in one’s advantage over others. As maturity encourages greater purpose for our lives, one may redefine their success as the greatest good they can provide the earth given the limits of their understanding. And when limited understanding inhibits the scope of success, Daniel Schmachtenberger makes for an invaluable asset.

Daniel is first to admit he had a head start on big-picture thinking. While other precocious minds had to ward off traditional education’s tendency to teach subjects as if disconnected from each other, Daniel was experiencing early childhood in the Transcendental Meditation community of Fairfield, Iowa while being homeschooled on the works of Buckminster Fuller, Fritjof Capra, and David Bohm, to name just a few of many influences. When an upbringing is culturally backdropped by the potential depth of consciousness, educated by groundbreaking forerunners in whole systems science and transdisciplinary problem solving, and then juxtaposed against the obscene extent of suffering in the world, one may see how Daniel became so deeply impassioned in expressing what could be, and how to get there.

After many relocations in childhood, Daniel returned to Fairfield to further math and eastern philosophy studies at Maharishi University, before delving into the work of his adult life. After accumulating comprehensive inventories on behavioral influence, coupled with an already comprehensive literacy of complex systems and whole systems science, he then founded The Emergence Project and began working with a host of luminaries to tackle global scale problems with global scale solutions. Concurrently, he researched the epistemological frontier of neuroscience, delving deeply into integrative medicine as well as emergent neurotech tools and psychological techniques to optimize solutions on both sides of the mind/brain interface.

All of these approaches, within an overarching framework of whole systems problem solving, have resulted in his axiomatic deconstruction of assumed scientific boundaries, and the emergence of a more integrally connected body of knowledge from which to understand scholarship. Daniel is not only a founder at Neurohacker Collective, but moreover a uniquely educated pioneer who is broadening the definition of scientific rigor itself.

He also has broadened the definition of work hours to a schedule only kept by vampires, so please, meet him halfway on his requested meeting times. Daniel at midnight is a revelation. Daniel at 9am? We have no idea…