How Entrepreneurs Can Solve Large-Scale Problems 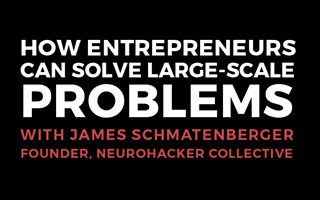 In this episode of Starting From Nothing, Andy Drish talks with James Schmachtenberger - Tech and wellness entrepreneur, filmmaker, political activist and former director of a holistic health college. He has a unique background that stems from the interconnected nature of large-scale problems and solutions that focus on the entirety of the issue. His latest accomplishment is a groundbreaking cognitive supplement called Qualia that helps neurological and physiological function.

What if there was a pill that could increase your motivation and overall cognitive functioning.

What if that pill could even allow you to experience a deep empathy for others and the feeling of being more connected with the world around you.

I promise this isn’t something from a sci-fi movie - it’s real and it’s one of the most fascinating products I’ve tried in a while.

There’s a lot of similar products out there that claim to improve focus and productivity - and I’ve tried a few of them - but there is always a cost that they don’t tell you.

With most of the products I tried I would get jittery and really anxious. They were also giving me so much energy that I couldn’t sleep at night. For every day I had at 150%...the next day was sure to be at 50%.

It just didn’t make sense…But this is where Qualia is different...

James used his unique education to set out making Qualia focused on improving cognitive functions across the board - without sacrificing anything.

The philosophy that solving a problem while creating another one hasn’t solved anything has been one of his guiding fundamentals. It’s led him to a life of discovery about what the underlying factors are in human motivation and how that shapes what we do as a society.

It was also the motivation behind creating Qualia in the wake of a major burnout in his early 20s. This burnout was so serious that James decided to undergo an experimental IV therapy...Not only did his motivation, energy and memory begin to come back - he realized his empathy for others had also been affected and almost immediately it was switched back on.

For the next 7 years James would undergo R&D both on himself and finally through formal trials in order to produce Qualia.

This episode is packed with even more insight into James’ mission to optimize human potential and how Qualia is helping creatives and entrepreneurs improve their mental and emotional capacity.

In this episode you will…