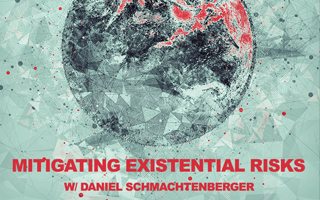 This is our fourth episode of Future Thinkers with Daniel Schmachtenberger, and as every other time, it left us fascinated and inspired.

Daniel is the co-founder of Neurohacker Collective and founder of Emergence Project, a futurist think tank.

This is probably our favourite episode with Daniel. We dive into the existential risks threatening humanity, and how we can mitigate them.

The natural phenomena include things like huge asteroids hitting the Earth, and solar flares or coronal mass ejections with a high enough intensity to knock out our power grid, destabilize nuclear cooling stations and lead to uninhabitable biosphere and ocean acidification.

Although natural risks are important to look at, Daniel Schmachtenberger is more concerned about human induced existential risks.

These include man-made climate change, which can cause agricultural failure, mass migration, and ultimately state failure and war. It also includes the risk from nuclear weapons and exponentially growing technologies like AI, biotechnology, and nanotechnology.

Daniel Schmachtenberger claims that an underlying problem behind many of man-made existential risks is our collective loss of ability to make sense of the world. With the rise of fake news, scientific research being funded by corporate interests, and technologies evolving faster than we can keep up with, it’s getting harder and harder to understand what is true and what is important.

Exponential tech increases our ability to affect things, but not the quality of our choiceCLICK TO TWEET

We have a system that runs on competitive advantage, both in national markets and a global level. This system is based on win-lose game theory, which incentivizes actions that give people and entities a competitive advantage, rather than actions that benefit humanity as a whole. This leads to pharmaceutical companies wasting time and talent repeating research (or not doing it at all if it’s non-patentable) while people die, and the earth holding enough nukes to wipe out the planet more than 10 times over.

Far from hopeless, Daniel reminds us that most of what we think of as “flawed human nature” is actually just social conditioning. Conditioning which is possible to change, or redirect with properly placed incentives.

The fundamental question Daniel is trying to answer is this: how do we design a system inside which all incentives are properly aligned, and we start valuing things around us for their systemic and not differential value?

We have a system that attracts, incents and rewards pathological behavior.CLICK TO TWEET

Daniel’s recent project is Neurohacker Collective, a smart drug brand with a vision of holistic human neural optimization. Their first product Qualia is a reference to a philosophical concept meaning “an individual instance of subjective, conscious experience”.

After trying Qualia ourselves, we decided to arrange a special deal for our listeners who also wanted to give it a try. When you get a subscription to Qualia at Neurohacker.com, just use the code FUTURE to get 10% off.

Human nature has the capacity to transcend what human behaviour has been so far.CLICK TO TWEET

Shit, the whole evolutionary process resulted in me. - Daniel Schmachtenberger.CLICK TO TWEET

“If you’re scaling towards the power of gods, then you have to have the wisdom and the love of gods, or you’ll self destruct. ” – Daniel Schmachtenberger

“The real existential risk is a loss of the ability to make sense of the world around us: what is worth doing, and what the likely effects of things will be” – Daniel Schmachtenberger