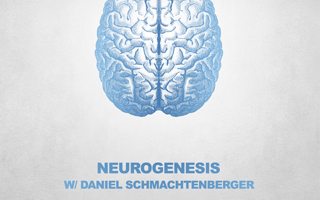 This is the second half to our interview with Daniel Schmachtenberger, the Co-Founder of Neurohacker Collective. If you haven’t already, listen to the first half, in which Daniel defines neurohacking and explains the first steps.

Neurogenesis is the natural process of the formation of new neurons, which can be induced through various technologies and techniques to treat disease or increase brain function in health individuals. This process results in an increase of gray matter density and processing capacity of the brain, and it slows down the brain’s aging process. Neurogenesis is very useful for treating disease like Alzheimer’s, and for people who suffered brain injury or psychological trauma. It is also useful for healthy people who want to increase their brain’s capacity.

One of the most effective known technique of kickstarting the process of Neurogenesis is learning new sets of motor skills, but it can also be done through supplements, meditation, or other methods.

Continuing into other areas of neurohacking, we get into the discussion of the therapeutic uses of psychedelics. Different psychedelics produce different effects. That makes some better used for treating addiction and others for trauma, but in general, they all increase neuroplasticity. The increased neuroplasticity of the brain on psychedelics along with the proper guidance allow us to recontextualize past experiences and reframe our outlook on life.
When people are overwhelmed, the result of unprocessed stuff is anxiety, confusion and…CLICK TO TWEET

We discuss what parts of ancient neurohacking techniques could be useful to adopt in the modern world. Daniel mentions rites of passage ceremonies, which can be helpful for making sense of major life transitions.

To wrap things up, Daniel emphasizes studying the human brain as a complex system. He zooms out to the importance of understanding and remodeling our socio-economical structure with that in mind. He explains that the current economic incentives that our societies are built or are misaligned with human and environmental well-being.

After trying Qualia ourselves, we decided to arrange a special deal for our listeners who also wanted to give it a try. When you get an ongoing subscription to Qualia at Neurohacker.com, just use the code FUTURE to get 10% off.

Happiness requires beings that are resilient to discomfort.CLICK TO TWEET

“To have more humans visioning what is a viable thriving civilization aligned with our evolving capacities is one of the most critical things that has to be happening more, for humanity to make it”  – Daniel Schmachtenberger of Neurohacker

“How do I build a house where my primary metric is optimizing the enlightenment and well-being of the human that lives inside, along with the well-being of the environment?” – Daniel Schmachtenberger of Neurohacker

“As people learn that their inner state doesn’t have to be affected by the environment as much, that leads to more resilient, happy people.” – Daniel Schmachtenberger of Neurohacker