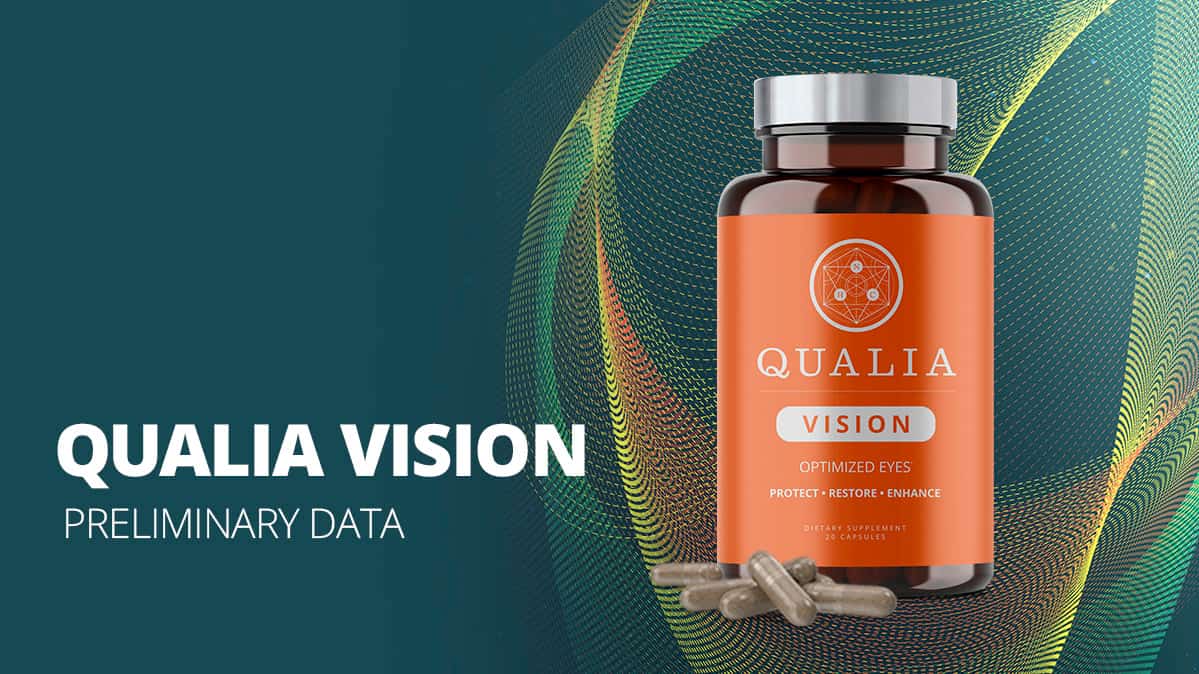 Qualia Vision was formulated for people who want support for the eye strain produced by digital screens (e.g., computers, tablets, smartphones, televisions) and who may be concerned about protecting their eyes from blue light. One of the goals of the product was to give nutritional support to counter the eye fatigue and strain that is common among persons with high amounts of screen time. Another goal was to provide relief for tired, sore, or irritated eyes. During the development of Qualia Vision, volunteers with high amounts of daily screen time agreed to take the product and give feedback about their experiences of screen time eye strain issues.

Twenty-four adults, with at least 4 hours a day of screen time, were divided into two groups: one group was instructed to take one capsule daily of Qualia Vision; the other group was instructed to take 2 capsules a day. Both groups were instructed to take Qualia Vision with their first meal and to follow a 5-days on, 2-days off dosing schedule. Each participant was sent enough doses for four weeks. Prior to beginning supplementation, and after each week of supplementation, participants were given a list of thirteen statements related to screen time eye strain (e.g., my eyes feel strained, objects appear blurred, my eyes feel dry) and asked to rate how they experienced each during the past week. There were five answer choices, which were scored as follows: not at all = 0; slightly = 1; moderately = 2; severely = 3; and very severely = 4. The scores for each of the thirteen issues were added together to produce a composite score, with higher scores equating to greater screen time eye strain.

Highly Rated. 88% of participants rated the product as excellent or good.†

Fast-Acting Support ... More Relief Over Time. Average screen time eye strain scores were lower at week 1 than baseline (8.5 vs. 25.42), at week 2 (6.57) than week 1, and at week 4 (6.13) than week 2. The 5-day change in screen time eye strain scores suggests that these participants experienced support for fatigue, strained, sore, and irritated eyes soon after starting Qualia vision. The continued gradual decline in scores suggests that Qualia Vision may have provided more relief the longer it was taken by these participants.†

Relief with 1 Capsule; More with 2. While responses from both dosage groups suggested substantial relief, the participants in the 2 capsule Qualia Vision group experienced slightly more relief from screen time eye strain issues over the 4 weeks (79% change for 2 capsules versus 72% change in the 1 capsule group).†

†Based on proprietary survey data from 24 people after 4 weeks of Qualia Vision.

Disclaimer: These results are preliminary, only represent the experiences of these participants, and may not be statistically significant.