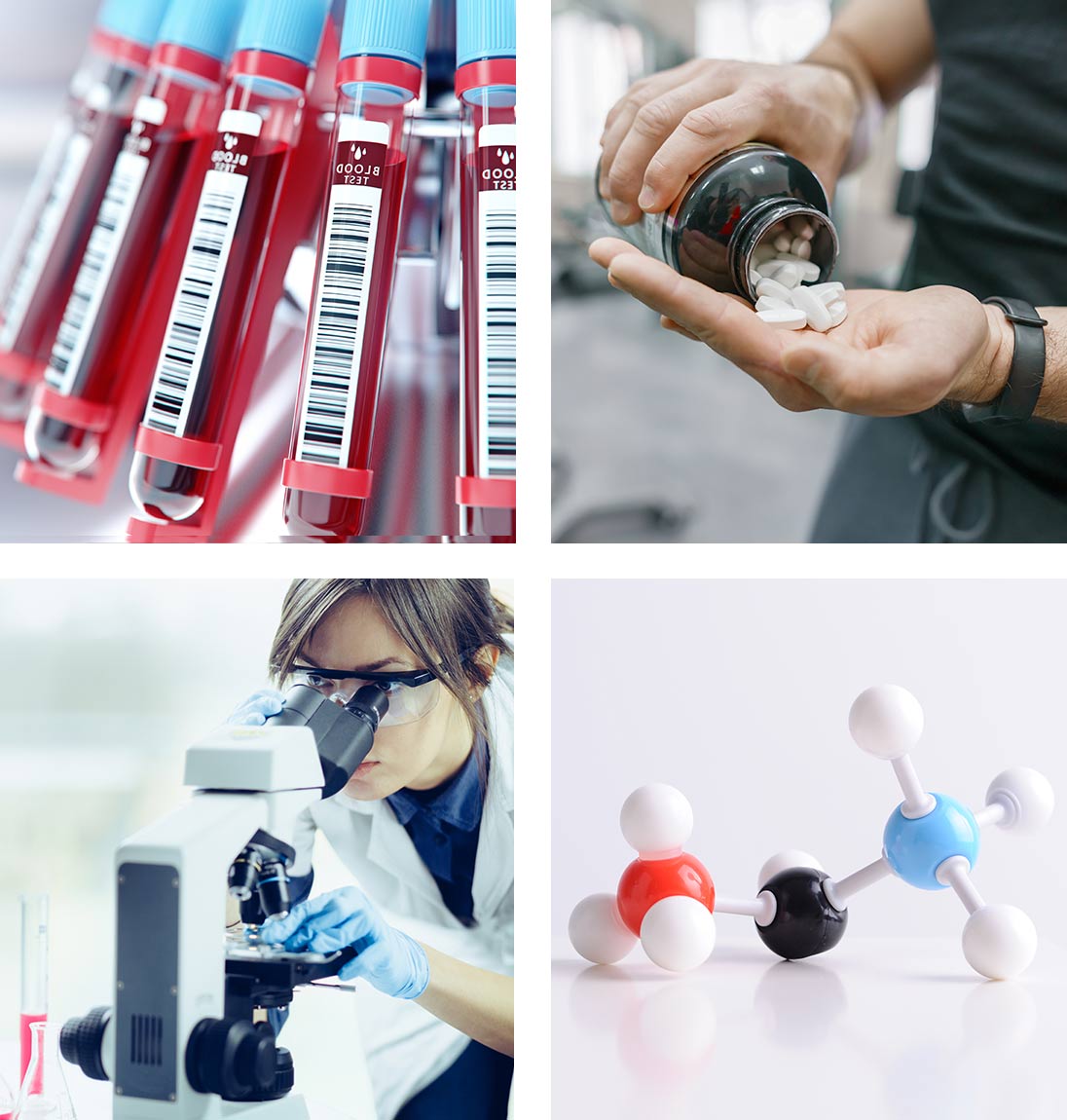 A small pilot study of Qualia Life—originally branded as Eternus—was conducted on 9 individuals in November-December 2019 as part of a larger research project by Longevity Diagnostics Research. The primary objective was to understand whether NAD+, and the levels of other molecules in the NAD metabolome, would change from baseline after 5-days and 4-weeks of supplementing with Qualia Life.

After completing the initial blood draw, each participant was given a four week supply of Qualia Life and instructed to take eight capsules daily, between about 7-9 am with a glass of water for five days, followed by two days where no capsules would be taken. This five-days on, two-days off schedule continued for four weeks.

The results suggest that supplementation with Qualia Life may produce meaningful changes in molecules within the NAD metabolome in whole blood and plasma after both 5 days and 4 weeks.

Some Important Changes in Whole Blood After 4 Weeks Were:

Ten individuals—7 male and 3 females with ages ranging from 30 to 83 years old—participated. All ten completed testing after 5 days of taking Qualia Life. One individual, a male 30 years of age, was unable to attend the final venipuncture visit because of an emergent family issue, resulting in 4-week data being available for 9 out of the 10 original participants. 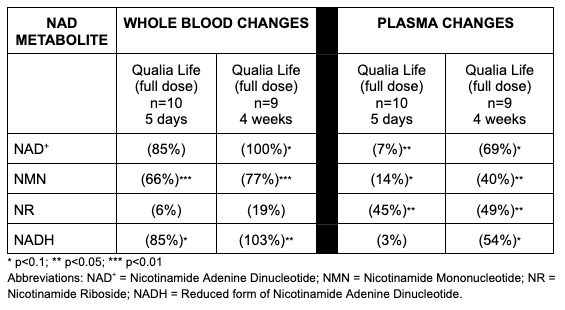 Measurable increases in NAD+ were detected in whole blood after 5 days of Qualia Life supplementation. NAD+ levels increased further after 4 weeks. The 100% relative increase in whole blood NAD+ was greater than what’s been reported for a 300 mg dose of nicotinamide riboside (NR) [1,2].

Despite not containing any NR, plasma NR increased by 45% and 49% from baseline after 5 days and 4 weeks of Qualis Life supplementation. To our knowledge, this is the first report of a significant increase in plasma NR levels in any study that has supplied NAD+ precursors orally.

Qualia Life increased whole blood NR by 19%. While this result was not statistically significant, the modest increase may be noteworthy, because an increase in whole blood NR was not detected compared to baseline in a study that supplemented a 1000 mg dose of NR for 21-days [3].

NADH is the reduced form of NAD+ in the redox pair and is used to carry electrons from the citric acid cycle to be used in oxidative phosphorylation (OXPHOS) for production of ATP. NADH increased in whole blood by 103% and plasma by 54% after 4 weeks of Qualia Life. The increases in whole blood and plasma NADH were similar to those found with NAD+. Studies of supplementation with NR have not reported NADH results, so comparisons are not possible.

Several factors should be kept in mind when interpreting the results. The study contained a small number of participants and was not placebo-controlled. It was part of a larger study that was being conducted for the purpose of obtaining information on different collection and preparation methods for measuring NAD+ and related molecules. It should be noted that the absolute value of the baseline concentration of NAD+ in whole blood was lower than previously reported (using different methodology) [3,4].  The baseline concentrations of NAD+ in plasma were similar to what’s been previously reported [5]. As part of the research project, Longevity Diagnostics Research is evaluating the comparative methodologies and their method to see if they can improve on absolute vs relative quantification of NAD+. Baseline concentrations of NMN and NR in whole blood and plasma were similar to what’s been previously reported [3,5]. While Neurohacker Collective is encouraged by the results of this preliminary pilot study, further controlled, larger studies will be required to verify the findings.