What Is Insulin? Understanding The Role of Insulin in Metabolism and Healthy Aging 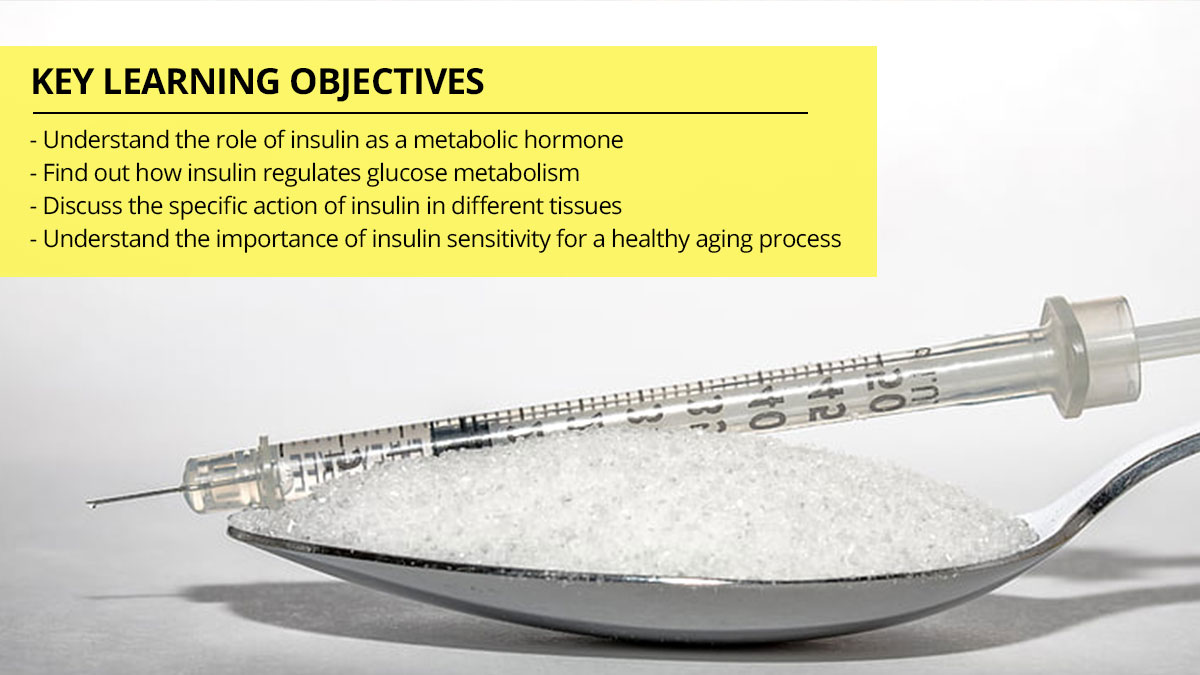 Understand the role of insulin as a metabolic hormone

Discuss the specific action of insulin in different tissues

Understand the importance of insulin sensitivity for a healthy aging process

Insulin is a hormone produced by beta cells in the pancreas with a central role in the regulation of metabolism and cell energy reserves. The major metabolic action of insulin is to regulate blood glucose levels and to promote the storage of energy substrates as macromolecules that can be mobilized between meals or in contexts of high energy demand.

Insulin acts on different metabolic tissues to promote the replenishment of energy stores: it stimulates glucose uptake from the blood by the liver and skeletal muscle and its storage as glycogen; it stimulates the uptake of fatty acids by adipose tissue and their storage as triglycerides; and it stimulates amino acid uptake by muscles and their use for muscle protein synthesis. Therefore, insulin is a major anabolic hormone[1].

Insulin is an important metabolic hormone that stimulates the storage of energy reserves in tissues in the form of large molecules.

Insulin stimulates glucose uptake by mobilizing glucose transporters (GLUTs) to the cell membrane, which are required for glucose to cross the cell membrane. There are different types of GLUTs with different properties. GLUT4 is an insulin-dependent glucose transporter, meaning that it takes up glucose when it’s activated by insulin[1]. GLUT4 is mainly expressed in adipose tissue, skeletal muscle cells, and cardiac muscle cells. In these tissues, which are the major energy storage tissues, the uptake of glucose from the blood to the cells is therefore stimulated by insulin. Insulin-induced GLUT4 activity in metabolic tissues is important because it determines the rate of glucose uptake from the blood into tissues and therefore plays a key role in glucose homeostasis and in the rate of glucose metabolism[2].

The other types of glucose transporters, GLUT1, GLUT2, and GLUT3, are independent of insulin signaling. GLUT1 and GLUT3 are expressed in all tissues and are responsible for basal glucose uptake. GLUT2 is expressed in pancreatic beta-cells and liver cells and has properties that allow glucose to enter these tissues at a higher rate when blood glucose levels rise.

The liver doesn’t need insulin to take up glucose. When blood glucose levels are high, glucose enters the liver at a higher rate through the GLUT2 transporter[17]. The general action of insulin in the liver is to promote glucose storage as glycogen and to suppress hepatic glucose production when blood glucose levels are high. Insulin promotes the synthesis of glycogen (i.e., glycogenesis) by stimulating the activity of the enzyme glycogen synthase. At the same time, insulin inhibits glucose release from glycogen breakdown (i.e., glycogenolysis) and glucose production from non-carbohydrate precursors (i.e., gluconeogenesis)[18].

Our body stores about a day’s worth of glycogen; when these stores are replenished, excess glucose is converted into fatty acids and then into triglycerides. Insulin also decreases fatty acid oxidation and increases fatty acid and triglyceride synthesis as part of an energy-storage and biosynthesis-promoting effect[19].

Insulin stimulates the creation of liver glucose stores in the form of glycogen and suppresses the production and release of glucose from the liver to the blood when glucose levels are high.

In skeletal muscle, insulin stimulates the uptake of glucose via GLUT4, promotes glycogen synthesis, and inhibits glycogen breakdown. When muscle glycogen storage is replete, glucose utilization is maintained by converting it to lactate, which can be released into the blood and taken up by the liver to be converted to glycogen (an “indirect pathway” of glycogen synthesis). This allows for the removal of excess blood glucose by muscles even when muscle glycogen stores are full, thereby helping to maintain normal blood glucose levels.

In muscles, glycogen synthesis and degradation are regulated to meet the energy needs of the muscle[20]. Insulin promotes the storage of glycogen to be used as a source of glucose for energy production. Because ATP production from glucose is faster, glucose is the preferred fuel during high-intensity bursts of exercise. But during mild to moderate intensity prolonged exercise, fatty acids become the preferred fuel because, even though ATP production by fatty acid oxidation is slower, it yields more ATP. Insulin also promotes the uptake of free fatty acids from the blood by muscles to be used as fuel or stored as triglycerides[19]. But muscles only store a small amount of triglycerides; the vast majority of fatty acids used by muscles come from triglyceride breakdown in adipose tissue.

Insulin promotes the uptake of glucose and its storage as glycogen in skeletal muscles. Muscles are the body’s major glycogen reserve.

Insulin also has important effects on protein metabolism in muscles, where it promotes the uptake of amino acids, stimulates protein synthesis, and decreases protein degradation. By doing so, insulin stimulates muscle growth and modulates skeletal muscle fiber regeneration and growth. Insulin also activates and promotes the proliferation and differentiation of muscle satellite cells (muscle precursor cells)[21,22]. Therefore, a major effect of insulin in protein metabolism is to favor the buildup of muscle protein[1].

Adipose tissue accounts for a relatively small proportion (<10%) of peripheral glucose utilization in response to insulin. Nevertheless, it is very sensitive to insulin, which stimulates glucose uptake via GLUT4. In adipose cells, although some glucose is stored as glycogen, most is converted into lipids[19].

Adipose tissue is the major store of triglycerides in the body. When necessary for energy production, triglycerides are mobilized and broken down to fatty acids, which are carried via the blood to other tissues, particularly muscles, where they can be metabolized through fatty acid oxidation to produce energy[19].

In adipose tissue, insulin stimulates the uptake of fatty acids from the blood and its storage as triglycerides.

Insulin’s effects on energy metabolism are not limited to its direct action in metabolic tissues, they are also a result of insulin signaling in the central nervous system. The brain is also a target for insulin, where it modulates brain glucose sensing and the brain’s responses to blood glucose levels[24].

Through its action in the brain, insulin also influences energy expenditure through the regulation of body temperature. Insulin acting in the brain can activate heat-producing mechanisms in brown adipose tissue and enhance diet-induced thermogenesis[24,26,27].

Furthermore, brain insulin signaling modulates a number of neurotransmitter systems and is essential for neurological processes, participating in the regulation of cognition, learning, memory, and mood[28].

What Is Insulin Sensitivity?

Insulin sensitivity tends to diminish with age, but lifestyle patterns play a very important part in the development of insulin resistance. Overnutrition, excessive weight, and insufficient physical activity are among the major contributors to the development of insulin resistance[18]. In experiments that restrict sleep (i.e., produce sleep deprivation), insulin sensitivity is decreased[29–32], while extending sleep in adults that consistently get insufficient sleep improves insulin sensitivity[33].

Insulin sensitivity—the measure of a tissue’s ability to efficiently respond to the actions of insulin—is a hallmark of healthy longevity.

Insulin resistance can easily escalate to serious tissue dysfunctions. For example, if glucose uptake by muscles decreases due to insulin resistance, glucose may be shunted to the liver; there, if glycogen stores are replete, glucose will be converted into fatty acids and triglycerides, which will then be exported for storage in adipose tissue. An exaggerated production of triglycerides in the liver can lead to the local ectopic fat accumulation, known as fatty liver or hepatic steatosis. The associated accumulation of lipid intermediate metabolites can disrupt insulin signaling, feeding the progression of insulin resistance and further accumulation of ectopic fat[18,41].

As these metabolic changes start to unfold, fat accumulation in adipose tissue also increases. This results in an increased secretion of inflammatory mediators by adipose tissue, which also promotes insulin resistance[34,42–45].

Insulin-resistant adipose tissue loses the ability to effectively regulate lipid levels in the blood. As a consequence, all tissues become chronically exposed to higher concentrations of fatty acids and triglycerides in the blood. An increase in blood lipid levels increases the uptake of fatty acids by muscles and the liver, leading to further lipid accumulation and enhanced insulin resistance[18,23].

Therefore, loss of insulin sensitivity in skeletal muscles, the liver, or adipose tissue, can easily trigger a feed-forward loop of events that will increase, perpetuate, and generalize insulin resistance. The associated release of inflammatory mediators into the blood can cause a state of chronic low-grade inflammation that affects all tissues in the body and that also feeds the loop of insulin resistance, fat accumulation, and inflammation. These processes also trigger a cascade of events that increase the production of reactive oxygen species (ROS), which in turn lead to DNA damage, mitochondrial dysfunction, and impaired cellular functions[34,42–45].

Insulin resistance is associated with processes that negatively impact the aging process and contribute to many age-related dysfunctions.

Why Supporting Insulin Signaling Is Important

By opposition, insulin resistance is associated with a decrease in longevity for several reasons: it increases the development of cellular impairments that accelerate the aging process[50]; it is a risk factor for poor cardiometabolic health (i.e., age-related issues that impact heart health and metabolic performance)[51]; and it has been linked to unhealthy brain aging[52].