What is Mitochondrial Biogenesis? Benefits & Effects 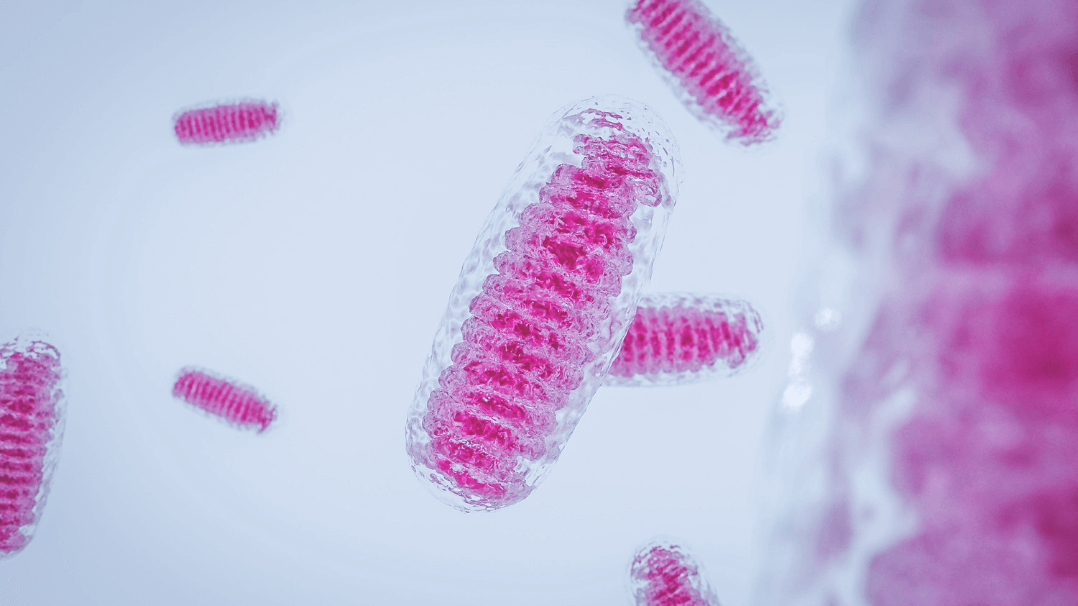 What is Mitochondrial Biogenesis? Benefits & Effects

Mitochondrial biogenesis is the cellular process that produces new mitochondria. It’s one of the ways cells adapt to the ever-changing energy requirements dictated by environmental and physiological conditions. Under circumstances of decreased fuel supply, such as caloric restriction, or of increased energy demand, such as exercise, cells have to adjust their metabolic processes to maintain the availability of cellular energy (as ATP) to meet the energetic needs of tissues.

When metabolic stimuli are fleeting and mild, cells can quickly adapt by adjusting what they use for fuel based on what’s available. For example, if blood sugar (i.e., glucose) is in short supply, they may switch from preferentially using glucose to using fatty acids as the primary fuel, while simultaneously activating pathways that maintain blood glucose at constant levels.

Similar to many other cellular processes, mitochondrial biogenesis, and the interacting pathways that influence it, suffers with aging. This is the bad news. The good news is that there are things we can do to better support maintaining a fitter mitochondrial network.

Mitochondrial biogenesis is somewhat similar to muscles growing bigger and stronger with exercise. It results in fitter mitochondria able to make more ATP.

Mitochondria have their own DNA, the mitochondrial DNA (mtDNA). mtDNA is normally inherited exclusively from the mother. It is made up of multiple copies of small circular DNA that encodes only 13 essential proteins of the electron transport chain (ETC) complexes, as well as 2 rRNAs and 22 tRNAs needed for the production of those proteins.[16] The vast majority of mitochondrial proteins are encoded by nuclear DNA (nDNA; the DNA we inherit from both parents) and then imported into mitochondria. Therefore, the crosstalk between the two types of DNA assumes a very important role in mitochondrial biogenesis.

Mitochondrial biogenesis is a complex process that requires the replication (multiplication) of mtDNA, transcription and translation of mtDNA and nuclear DNA genes (the processes that produce proteins from DNA), mitochondrial membrane recruitment and extension, protein import, protein allocation to different mitochondrial compartments, and assembly of the electron transport chain complexes in the mitochondrial membrane. And all this is carried out in coordination with the dynamics of the existing mitochondrial network.[17]

It takes both nuclear DNA (inherited from both parents) and mitochondrial DNA (normally inherited exclusively from the mother) for mitochondrial biogenesis.

Cells detect information and decide how to respond. The response occurs, in a general sense, by turning on and off genes. But at any point in time, a cell might have to weigh many different pieces of information before deciding how to change gene expression. They decide what to do with the help of transcription factors.

PGC-1α, PGC-1β and PRC activate similar pathways and have similar effects in the regulation of mitochondrial biogenesis. But whereas PGC-1α and PGC-1β are found in higher levels in tissues that contain abundant mitochondria (e.g., heart, skeletal muscle, brown fat), PRC is expressed in higher levels in proliferating cells (i.e., the process that results in an increase of the number of cells). Furthermore, the expression and activity of PGC-1α can be induced by a variety of stimuli in a tissue-specific manner: calorie restriction in the liver, exercise in skeletal muscle, and cold in brown adipose tissue (BAT). PGC-1β is not induced by these cues.[25]

Only a few phytochemicals have been reported to support PGC-1β. Ursolic acid, which is found in plants including rosemary and apple peel, is one of them. In mice, ursolic acid has substantially upregulated PGC-1β in the liver and hypothalamus.[26,27] Rutin, when combined with exercise, supports fat tissue PGC-1β in mice fed a high-fat diet.[28]

The activity of PGC-1α depends on its expression levels, subcellular localization, and post-transcriptional modifications. PGC-1α is produced in an inactive form and accumulates in the cytoplasm; when it is activated either by phosphorylation or deacetylation, it accumulates in the nucleus (and mitochondria) and promotes mitochondrial biogenesis.

When a cell has decided it needs to make more ATP, PGC-1α coordinates the activity of nuclear and mitochondrial transcription factors, so the needed genes are turned on and off at the right times.

PGC-1α is positively regulated by several signaling molecules and pathways used to sense the energy supply of the cell and adapt to physiological stressors. Two energy sensors—AMP-activated protein kinase (AMPK) and sirtuins—play a key role in the upregulation of mitochondrial biogenesis through the activation of PGC-1α. The cAMP/PKA/CREB signaling pathway can also activate PGC-1α.

AMPK is a signaling molecule that is activated in response to an increased AMP/ATP ratio. So, when ATP synthesis is diminished, or ATP is being consumed at a high rate (such as during intense exercise), AMPK becomes more active. In this role, AMPK acts as an ATP sensor that signals the cell energy status of the cell.[58]

Sirtuins are a class of proteins involved in cellular stress response. Sirtuin activation requires the redox molecule NAD+ as cofactor. (see NAD+ CONSUMPTION USES: AN OVERVIEW) Sirtuin activity is NAD+-dependent and is upregulated by increases in NAD+ levels and/or a higher NAD+/NADH ratio. Therefore, sirtuins act as NAD+ sensors that signal the energy-related redox status of the cell.[79]

By sensing ATP and NAD+, AMPK and sirtuins paint a clear picture of the energy status and requirements of the cell at any given moment. They also act together to help cells restore ATP levels in the near term, and increase the capacity to make more ATP for the future.

Both AMPK and sirtuins, more specifically the sirtuin SIRT1, target signaling pathways that influence mitochondrial biogenesis to increase the energy production capacity of the cell. And they do so via PGC-1α: AMPK activates PGC-1α through phosphorylation;[92] SIRT1 activates PGC-1α through deacetylation.[93] Furthermore, AMPK and SIRT1 co-activate each other to further strengthen the signal.[19,94]

Another sirtuin, SIRT3, also has an important role in mitochondrial biogenesis. SIRT3 is activated by a higher NAD+/NADH ratio, with its expression stimulated by PGC-1α.[95] SIRT3 is found within mitochondria, where it regulates many important aspect of mitochondrial function. SIRT3 deacetylates and activates mitochondrial enzymes involved in fatty acid oxidation and the electron transport chain, increasing mitochondrial energy metabolism and ensuring that the new mitochondrial content is fully functional.[96]

Therefore, via activation by AMPK, SIRT1, cAMP/PKA/CREB, or ROS, PGC-1α levels can be upregulated to trigger an adaptive response to physiological stimuli, such as caloric restriction, exercise, cold, or oxidative stress.[17]

Behaviors including exercise, fasting, and cold exposure help promote healthy aging. PGC-1α sits at the crossroads of several cellular signaling pathways, ensuring that fitter mitochondrial networks are produced in response to these behaviors.

The thyroid hormones (TH) thyroxine (T4) and triiodothyronine (T3) are key regulators of metabolism. Among other effects, they increase the basal metabolic rate, regulate carbohydrate, fat, and protein metabolism, and promote thermogenesis (i.e, heat production) in brown adipose tissue, thereby having a significant influence on cell energy generation. Accordingly, TH (in the more active form T3) is known to have a significant impact on several aspects of mitochondrial function.[103]

Stimulating mitochondrial biogenesis is one of the main actions of T3.[104] Binding of T3 to nuclear thyroid hormone receptors induces the expression of PGC-1α and increases the production of a number of nDNA-encoded mitochondrial proteins.[103]

For healthier aging we need our cells to selectively get rid of defective mitochondria and replace them, through mitochondrial biogenesis, with higher performing ones.

While science informs us that mitochondrial biogenesis performance declines with aging, there are things we can do to push back against this decline. Exercise (especially weight training and high-intensity interval training ([HIIT]), fasting-related behaviors, and challenging the body with hot and cold therapies support fitter mitochondria. As Dr. Jack Kruse mentioned in a Collective Insights podcast, spending more time in nature can have a powerful effect on how mitochondria perform. And, lastly diet plays a large role: eating more of certain foods, and taking specific dietary supplements, can support mitochondrial biogenesis and therefore healthy aging. 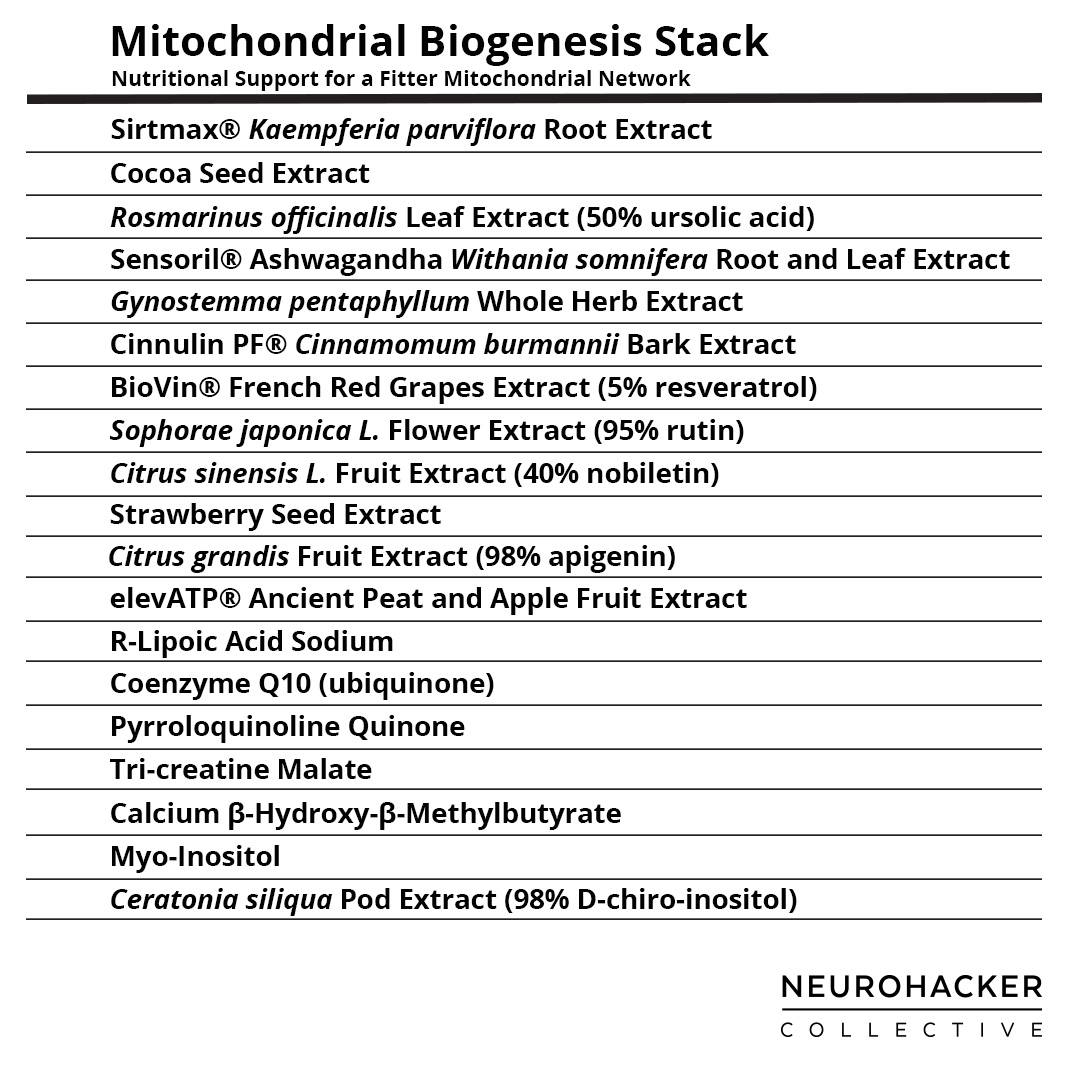