Why Controlling the Masses Through Media No Longer Works 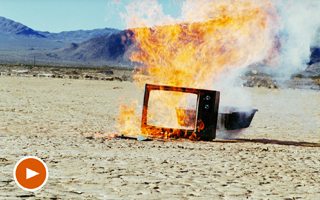 Jordan Greenhall talks about the shift from asymmetrical broadcasting controlling the masses via media, to the bi-directional communication that the internet provides us with today and what that means for the progression of society.

When television took over from print and radio as the dominant media in the second half of the 20th century, a hierarchy evolved in which the privileged few with TV camera access spoke to the masses. This top-down dissemination of news and opinion not only shaped information, but it also shaped the psychology of those people, and of anyone who has lived with one foot in the TV broadcast era, and the other in the new dynamic brought on by the Internet. That established top-down directive—and society's conditioning to widely accept what is presented to them by experts—is what Neurohacker CEO Jordan Greenhall describes as the Blue Church: "The Blue Church is a kind of narrative/ideology control structure that is a natural result of mass media. It is an evolved (rather than designed) function that has come over the past half-century to be deeply connected with the Democratic political “Establishment” and lightly connected with the “Deep State” to form an effective political and dominant cultural force in the United States," writes Greenhall on Medium. Greenhall is careful to point out that control is not necessarily always a bad thing: it is how hundreds of millions of individuals are able to make collective decisions and engage in effective collective actions to advance their society.

Greenhall believes the switch from top-down broadcast television to the bottom-up nature of the Internet explains American politics in the past 30 or 40 years, and certainly in the past two years. Broadcast television was asymmetrical: one person, speaking to millions, with no interaction. The Internet is highly symmetrical: everyone can speak and interact, and that is psychologically profound for individual thinking, and the manner in which a society makes decisions collectively.

Top-down media no longer has much sway over the masses because they have been shown an alternative and adapted quickly to it; younger people particularly are intuitively aware when something is being broadcast to influence them emotionally, and it simply doesn't work the way it used to. Take the recent Pepsi protest ad, which Greenhall calls a typical product of broadcast thinking. The bi-directional flow of information that characterizes the Internet is a new psychological ecosystem, one in which individuals can respond and critique the establishment or a phony advertisement openly. Top-down social control has been replaced by bottom-up social swarms.