Why We Need Collective Intelligence During Global Collapse, with Jordan Greenhall, Pt. 1 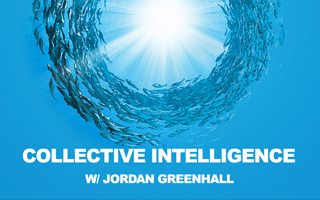 If it looks like we love the folks from Neurohacker Collective, that’s because we do. This time we’re bringing on the co-founder and CEO Jordan Greenhall, after featuring his fellow co-founder Daniel Schmachtenberger in four Future Thinkers episodes. The interview with Jordan will air in two parts.

Jordan Greenhall has been building disruptive technology companies for seventeen years, from founding DivX in 2000 to his latest Neurohacker Collective. He is also an advisor for Backfeed, a decentralized governance project on the blockchain. His interests range from complex systems strategy, to third wave blockchain technology, to cultural evolution. As he puts it, he’s dwelling on the edge of where science meets technology, and technology meets society.

The Three Factors Leading to the Global Collapse

As Jordan sees it, we are facing a potentially apocalyptic scenario for our world for three main reasons.

We have become very powerful as a species, but we are not wise enough to handle that power.

Finally, we have an immature relationship to our technology, from mobile phones to nuclear weapons.

All these three factors can create catastrophic and potentially existential outcomes for the whole humanity.

Collective Intelligence – a Hope for Humanity?

Humanity is still largely operating in a ‘paradigmatic mind’ system. We create a model of reality, identities and relationships, and use it to respond to the environment in different situations. When the world changes slowly, this works very well. But when it changes at the speed as it does today, the paradigmatic mind is not enough. We get confused and unable to make good decisions.

Jordan argues that we need an entirely different model of dealing with reality, a new frame of mind, a collective intelligence. This is an ability to come into communion with a group and act as a single unit of intelligence. This new type of intelligence may already be at work in the Generation Omega – those born after the year 2000. It may be an evolutionary trait that this generation has developed as a response to our complex, fast-paced world.

The question is how to scale this ability and teach the other generations how to do it. At this point, we all have to take responsibility for our own development, and do deep work on own capacity to show up in every dimension – cognitive, emotional, and perceptual.

“The mechanisms by which we collaborate right now, the tools and techniques by which our information flows, our sense making frameworks, are really fucked up.”

“What does it mean to grow up in a post-Wikipedia environment, where the idea of disciplinary expertise and chronological knowledge just doesn’t exist any more, and everything is collaboratively co-created, everything is a fluid object, and everybody has some possiblity of shaping it?”

“Getting extremely good at flowing between coherences and deconherences, at orienting yourself towards places where your energy is most needed now, and entering in coherence quickly and fluidly with potentially extremely heterogenous sentiences, is going to be in the nature of how this new model of collective inteligence looks like.”