What is The Gut-Brain Axis? An Exploration of The Communication Pathways Between The Brain, The Gut, And The Microbiota 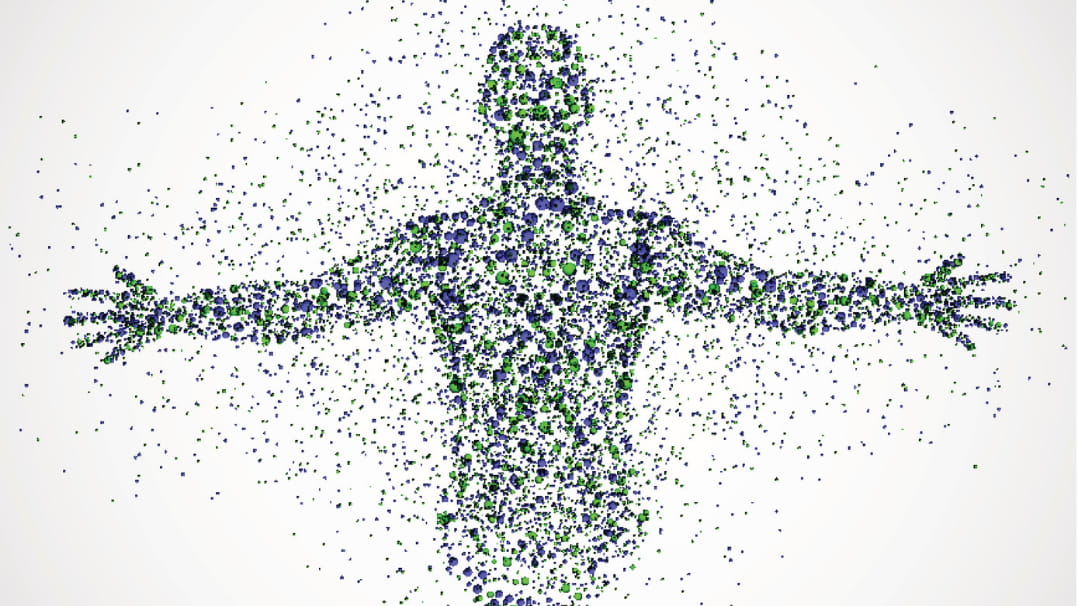 What is The Gut-Brain Axis?

The gut, its microbes, and the brain are connected by a complex communication and regulation system called the gut-brain axis. The gut-brain axis (also known as brain-gut axis, microbiota-gut-brain axis, gut-brain connection) is a bidirectional signaling network made up of neurons, hormones, immune cells, and microbial molecules.[1,2] It is part of a larger system that informs the brain of the internal state and health of our body. This sense is called interoception and it’s crucial for the maintenance of physiological balance in our body, a state known as homeostasis.[3]

The gut-brain axis gives the gut privileged access to the brain. But why does the gut need it? Let’s look at the numbers:

The brain needs to keep tabs on the gut because there is a very complex set of environmental, neuronal, immune, hormonal, and microbial interactions taking place there. Through the brain-gut axis, the brain can monitor and regulate these interactions and respond to changes in the composition of the microbiota due to infections, antibiotics, or diet, for example. More surprisingly, through the gut-brain axis, microbes can influence brain function, mood, and behavior.[6]

In this article, we explore the gut-brain connection and how the brain and the gut, our second brain, influence each other.

The gut and brain are constantly communicating and influencing each other. This interaction is called the gut-brain axis. It means that what goes on in the gut can affect how the brain performs, influencing how we think, feel and behave.

The nervous system has a specific division dedicated to controlling our automatic and unconscious visceral activity—heartbeat, breathing, digestion, excretion, etc. This division is called the autonomic nervous system (ANS).[7]

The ANS has two subdivisions: 1) the sympathetic nervous system controls our “fight-or-flight” responses and the physiological processes that allow us to quickly respond to threats: increasing heartbeat, breathing rate, blood pressure, and the release of energy sources for muscle activity, for example; 2) the parasympathetic nervous system has a complementary action by controlling “feed-and-breed” or “rest-and-digest” activities: favoring feeding, digestion, excretion, and sexual arousal, for example.[7]

The ANS is under the control of the central nervous system (CNS) and has significant control over gastrointestinal (GI) activity. However, the gut has its own nervous system—the enteric nervous system (ENS). The ENS controls GI movements, secretions from the GI wall and glands (e.g., pancreas and gallbladder), and local blood flow. The ENS senses microbial, endocrine, and immune molecules and signals the physiological state of the gut to the ANS and CNS.[2]

The ENS also has the capacity to act independently of the brain and devise local responses through intrinsic reflexes. For example, the movement of food through the GI tract is achieved through wave-like muscle contractions (i.e., peristalsis) that don’t require any input from the brain or the autonomic nervous system.[2]

The ENS is estimated to have more neurons than the entire spinal cord.[4] Because of the size, complexity, and capacity for independent activity of the ENS, we can think of the gut as “the second brain”.[8]

How The Vagus Nerve Links The Brain And The Gut

The Vagus nerve is the longest nerve of the ANS. It runs from the brain stem (the region where the spinal cord meets the brain) to the gut, branching along the way to reach other internal organs in the chest and abdomen. The Vagus nerve is the main communication pathway and a central element in the brain-gut-microbiota axis.[9]

The Vagus nerve is the main communication pathway in the brain-gut-microbiota axis.

How The Gut Microbiota And The Brain Communicate

The nervous system, via the Vagus nerve, is the main link in the gut-brain connection, but the endocrine and immune systems are equally important. In fact, communication in the gut-brain axis relies not only on neuronal signals (via neurotransmitters), but also on endocrine (via hormones and regulatory gut peptides) and immune (via cytokines) signals. The three systems work together to regulate gut physiology and microbiota composition and activity via mucus production, gut peptide production, antimicrobial peptide production, epithelial barrier maintenance, and intestinal permeability regulation, for example.[1,2]

Signaling from the gut microbiota is largely mediated by microbial metabolites such as short-chain fatty acids (SCFAs), secondary bile acids (2BAs), and tryptophan metabolites, for example. Some of these molecules can cross the intestinal barrier, reach the blood, and be transported in the bloodstream and across the blood-brain barrier to act directly on the brain where they modulate brain function and trigger systemic responses.[1,2,11,12]

Still, most of the effects of the gut microbiota on brain function are dependent on the activation of the Vagus nerve.[6] Microbial compounds may directly activate nerve terminals in the intestinal mucosa. In fact, bacteria can produce neurotransmitters and neuromodulators, including gamma-aminobutyric acid (GABA), noradrenalin, serotonin, dopamine, and acetylcholine.[6] But the activation of the Vagus nerve can also be indirect. Microbial compounds may act on epithelial cells to trigger the release of molecules that in turn modulate neural signaling within the ENS or in vagal afferents.[12] The gut microbiota can also have direct effects on immune cells and trigger the release of inflammatory mediators and other signaling molecules that can activate the Vagus nerve.[13]

The nervous, endocrine, and immune systems work together in the microbiota-gut-brain communication and regulation system.

Neuroendocrine signaling in the gut-brain axis

The nervous and endocrine systems, whose association is known as  the neuroendocrine system, collaborate closely in the regulation of many physiological pathways and functions in the human body, including the brain-gut axis.

The hypothalamus and the amygdala are two neuroendocrine brain regions with key functions in the regulation of homeostasis. They receive and integrate information about the status of our tissues and organs, including our gut, and devise responses that adjust physiological processes in order to maintain balance in the body. In the brain-gut axis, these responses are conveyed mostly through the ANS, via the Vagus nerve, and the neuroendocrine system, via a signaling system with the adrenal gland known as the hypothalamic–pituitary–adrenal (HPA) axis.[2]

The HPA axis is one of the main neuroendocrine pathways in the human body. It regulates digestion, mood, emotions, sexuality, energy expenditure, and most notably, the stress response.[14] The HPA has a significant impact on gut physiology, modulating immune cell activity in the gut, altering gut permeability and barrier function, and affecting gut microbiota composition. [11,15,16] The HPA axis and the ANS regulate each other and collaborate with the immune system to regulate gut health.[15] 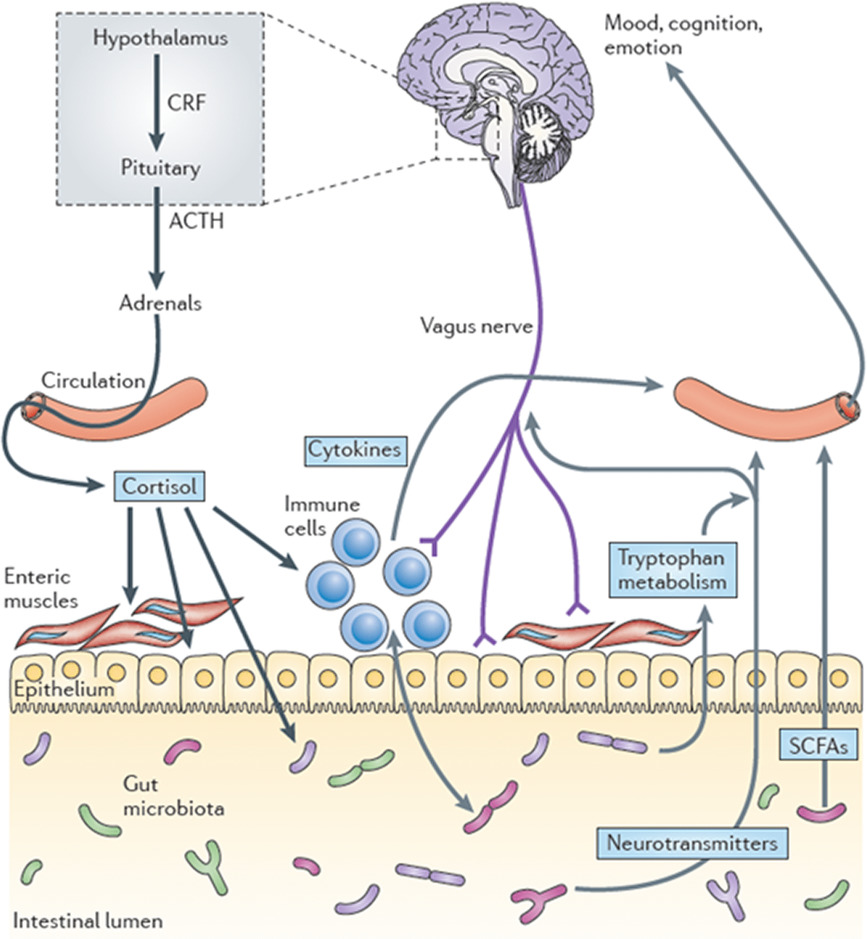 The Endocrine System of the Gut

Cells of the endocrine system of the gut are called enteroendocrine cells (EECs). They are found scattered between epithelial cells in the intestinal wall. EECs produce over 20 different types of hormones called gut peptides (or gut hormones).[11,17,18]

Gut peptide production by EECs is regulated by chemical and mechanical stimuli from the gut and the microbiota. Gut microbes produce metabolites and hormone-like molecules that can target the neuroendocrine system. For example, short-chain fatty acids (SCFAs), which are molecules obtained from the fermentation of complex carbohydrates such as dietary fiber, stimulate the secretion of gut hormones by EECs.[6,19]

In response to microbial signals, gut peptides released by EECs can activate receptors on local vagal nerve terminals and send input to the brain.[20] They can also be transported by the blood to the brain and directly activate relevant brain regions, such as the hypothalamus.[11,19]

In response to microbial signals, enteroendocrine cells release gut hormones that can activate vagal neurons or enter the blood flow and reach the brain.

Neuroimmune signaling in the gut-brain axis

Immune cells monitor the microbial composition of the gut. When there are significant changes in the microbiota composition or microbial signaling, immune cells can alert the brain by activating the Vagus nerve.[13] Immune cell chemical mediators called cytokines can also influence the activity of EECs and indirectly influence vagal neurons.[21]

Gut bacteria can also trigger the release of cytokines by immune cells into the blood flow. These cytokines can reach the brain and directly affect brain function.[6] They can thus affect the activity of the hypothalamus, and consequently, of the HPA axis, having an effect on the regulation of homeostasis and stress responses, for example.[15]

Signaling from the GI tract to the brain influences a number of brain functions, particularly feeding-associated behaviors, such as hunger, satiety, pleasure, or disgust. But the influence of the gut-brain axis on brain function goes way beyond feeding and begins early in life, when the brain is still developing. Following birth, gut microbial colonization occurs in parallel with cognitive development and impacts brain development and subsequent adult behavior and cognitive function.[25,26]

Accumulating evidence from animal studies shows that alterations in the gut microbiota can affect brain neurochemistry, including neurotransmitter signaling and brain-derived neurotrophic factor (BDNF) levels, for example. As a consequence of this neurochemical modulatory activity, the gut microbiota is able to influence all sorts of brain functions: executive function, cognition, mood, emotional regulation, stress response, pain, and social behavior.[1,6,12]

The microbes in the gut send messages to the brain and are able to influence cognition, mood, executive function, emotional regulation, stress response, pain, and social behavior.

Through this capacity to regulate stress responses, the microbiota may also influence cognition. Levels of stress-related hormones are known to be linked to memory and learning, with neuroendocrine signaling playing an important part in supporting cognitive function throughout life.[28] Accordingly, changes in the gut microbiota have been linked to stress-induced memory dysfunction.[29]

But the impact of the microbiota-gut-brain axis on cognition is not restricted to contexts of stress, as diet-induced changes in gut microbiota composition and diversity have been correlated with changes in memory and learning in mice regardless of being exposed to stress.[29,30] Data from animal research also indicates that age-related microbial changes may contribute to the age-associated decline in cognitive performance.[31]

As of yet, changes in the composition of the gut microbiota have not been causally associated with cognitive decline in elderly humans, but studies have shown that the core microbiota of older individuals is indeed different than that of the younger, and that age-related changes in the microbiota correlate with diet and health.[32,33]

Intervening in the composition and diversity of the gut microbiota using probiotics and prebiotics, with the goal of modulating brain function, has been an area of increasing research interest.

Probiotics are defined as “live microorganisms, which when consumed in adequate amounts, confer a health effect on the host.”[34] Probiotics have been shown to modulate the gut-brain axis in a way that contributes to the regulation and normalization of the HPA axis and ANS response to stress.[11] In mice, probiotics were shown to decrease the stressed-related plasma levels of corticosterone, adrenaline, and noradrenaline, prevent the stress-induced decrease in hippocampal neurogenesis and synaptic plasticity, improve anxiety-like and depressive-like behaviors, and prevent stress-induced memory deficits.[29,35,36] In humans, probiotic administration to healthy volunteers has been shown to improve visuospatial memory and produce an EEG profile consistent with improved memory.[37]

A prebiotic is “a nondigestible compound that, through its metabolization by microorganisms in the gut, modulates composition and/or activity of the gut microbiota, thus conferring a beneficial physiological effect on the host.”[38] Studies have shown that prebiotics may modulate the stress response in a similar way to probiotics.[11] Prebiotics were shown to reduce stress-induced hormone release, stress-induced changes in gut microbial composition, and anxiety-like and depressive-like behaviors. [39,40]

Probiotics and prebiotics can modulate the composition and diversity of the gut microbiota and be used as ways to impact brain function.

As research on the gut-brain connection progresses, it’s becoming increasingly clear that diet-based therapies targeting the gut microbiota may be used to influence brain function in humans. It seems likely that interventions using probiotics and prebiotics may become an appealing tool to hack into our brain, hack into our gut, our second brain, and support brain health, improve mood, and enhance cognitive performance.