Sovereignty in Chaos with Jordan Greenhall 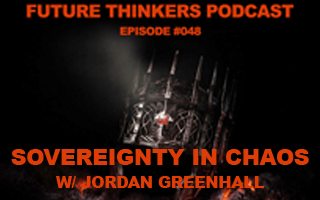 Game of Thrones and Climate Change

Game of Thrones is one great pop cultural analogy for the current state of human civilization. We’re playing political games, while climate change and humanity’s extinction knocks at the door. People often do not have the capacity to see this directly, but most of us can understand this on the level of myth.

The role of myth is going to become increasingly important, as our ability to make sense of the world in linear terms breaks down.

Blockchain and Building the Future

Jordan Greenhall sees blockchain technology as one of the most promising tools to rebuild our collective future.

He also talks about the importance of riding the waves of innovation instead of working against them or starting from scratch.

The Significance of Feminine Power

Jordan explains to us how the Feminine holds the key to avoiding the global collapse, and how we are becoming more aware of this. The feminine nurturing and caring, which has been seen by the modern civilizations as weakness and a distraction, is now beginning to get recognized as a fundamental universal power.

The Responsibility of the Different Generations

Jordan Greenhall explains that the generations that are now in the late stages of life, such as the Baby Boomers, need to step out of their ego and come to terms with the fact that most of their systems and solutions are no longer relevant for the world.

Generation X, or those in their 40s, need to step out of cynicism and selfishness, and learn to take a space of trust.

The Millennials, on the other hand, need to take more personal responsibility.

It is our job to break away from the ideological frameworks implanted into us by society, and establish a state of sovereignty.

By sovereignty, Jordan doesn’t just mean independence of thought and action, but also a deeper sense of integrity beyond ego and ideological frameworks.

We tried & liked Qualia ourselves, and decided to arrange a special deal for our listeners who are interested in neural enhancement. When you purchase Qualia just use the code FUTURE to get 10% off.

“The semantics of the political discourse in the West have accelerated away from wisdom, away from communication, and towards violence.” – Jordan Greenhall