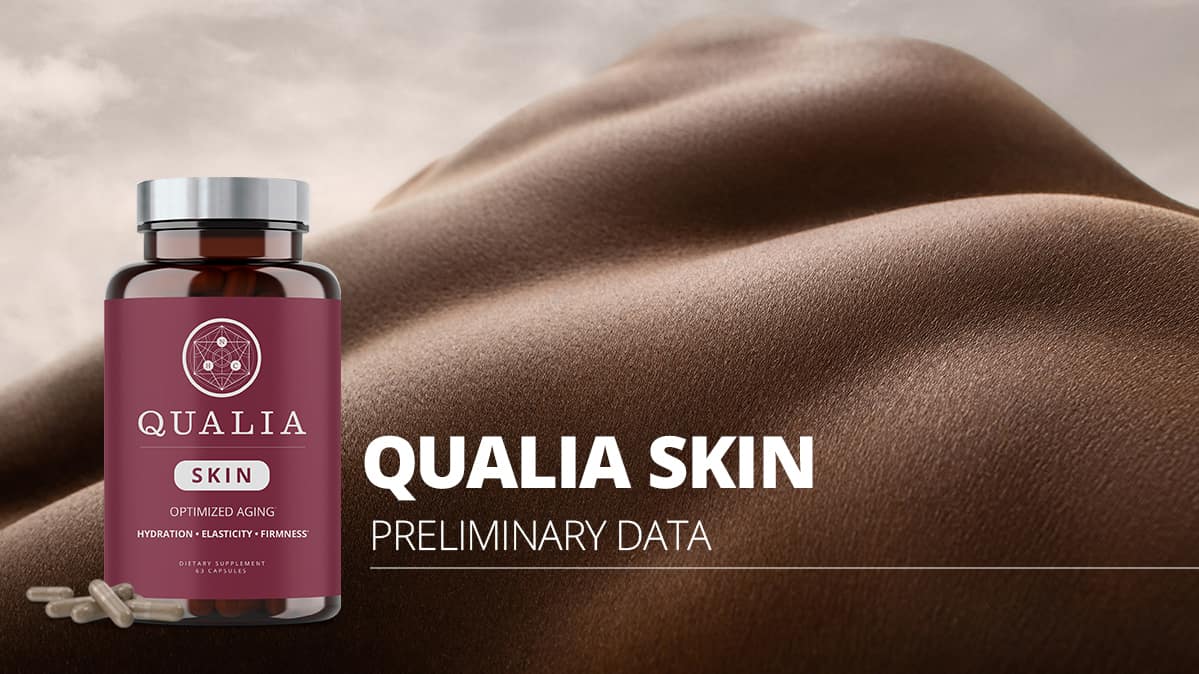 Neurohacker Collective created Qualia Skin with the goal of supporting skin appearance as a natural outcome of supporting skin health from the inside out. We aimed to create an ingestible skincare product that would support physiological processes relevant for skin health, and that, by doing so, would promote skin beauty from within.

Qualia Skin is a blend of 21 ingredients chosen based on their biological actions and on how they may act through complementary mechanisms to provide skin nourishment and support comprehensive skin health, healthy skin aging, and skin appearance.

This study aimed to assess whether Qualia Skin would change participant satisfaction and self-ratings of aspects of the skin’s feel and appearance over the course of 12 weeks of supplementation. We hypothesized that the combined activity of our ingredients would support skin health from within. One of the outcomes would be greater satisfaction in a number of areas related to skin appearance. To test this hypothesis, during the development of Qualia Skin, participants agreed to take the product and give feedback about their experiences.

The study included 52 participants—37 female and 15 male—with ages ranging from 25 to 61 years old. Data was collected in the form of custom surveys carried out at baseline and after 4, 8, and 12 weeks of supplementation. Surveys assessed 11 aspects of skin feel and appearance, including global satisfaction with skin health and youthfulness.

The study was not placebo-controlled, did not use validated questionnaires and was conducted on a small number of participants. More research is required to further validate and confirm the findings.

The mean scores for each survey metric at each time point are represented in Figure 1. 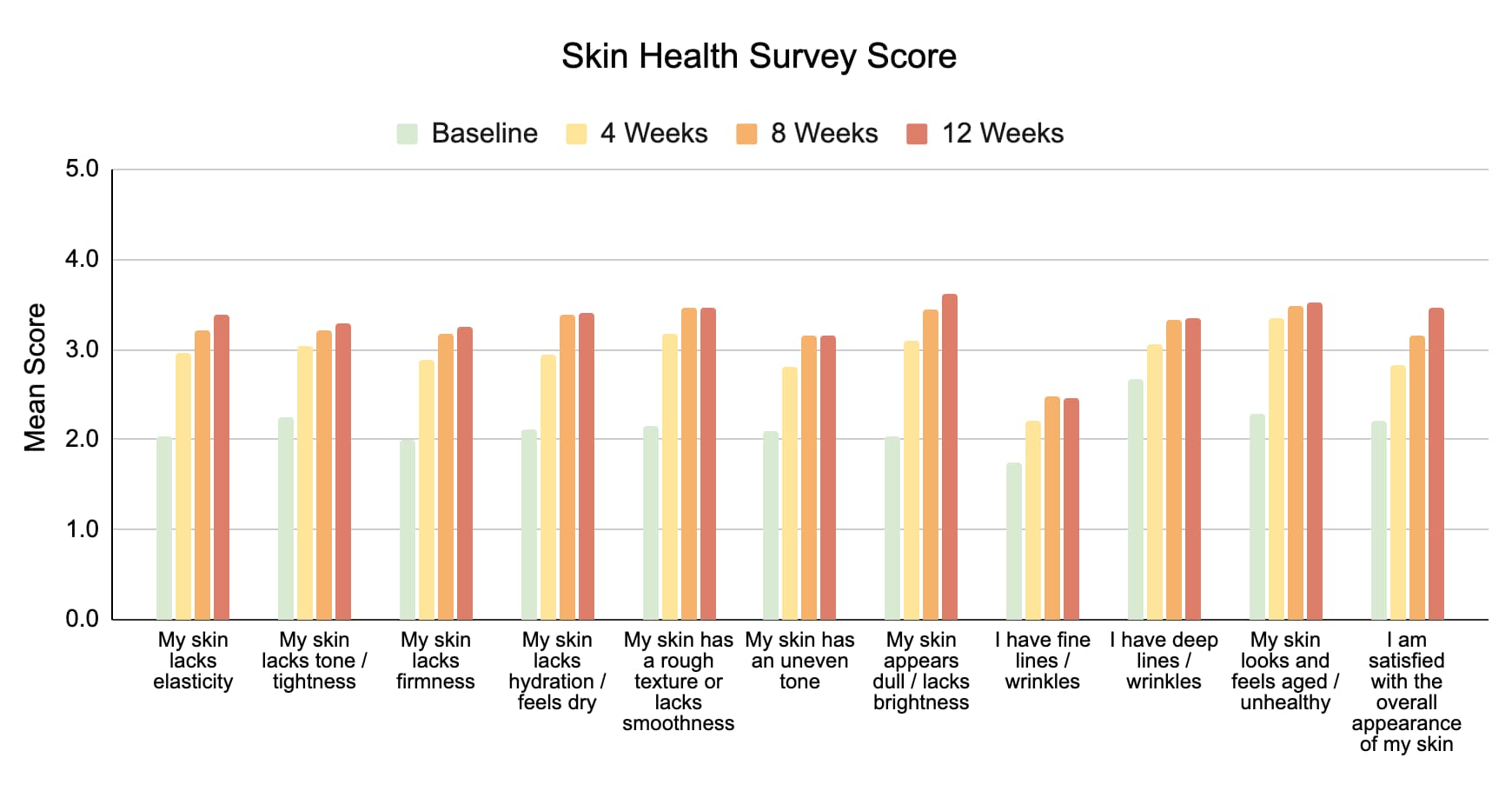 Figure 1 - Skin health survey scores at baseline and after 4, 8, and 12 weeks of Qualia Skin supplementation. Participants were asked to evaluate each of the metrics with one of the following ratings (later converted into a numeric score for data analysis): Strongly Agree (score = 1), Agree (2), Neutral (3), Disagree (4), Strongly Disagree (5). For the metric “I am satisfied with the overall appearance of my skin”, this rating was inverted as this item had a positive phrasing, whereas all other items had a negative phrasing.

Participants' self-ratings changed in ways that reflected greater satisfaction with the skin’s feel and appearance in every area assessed in this study following supplementation with Qualia Skin. Changes were apparent as early as week 4, with scores continuing to trend higher throughout the study. After 12 weeks of supplementation, the most marked changes from baseline were reported for skin brightness, elasticity, firmness, hydration, and smoothness. 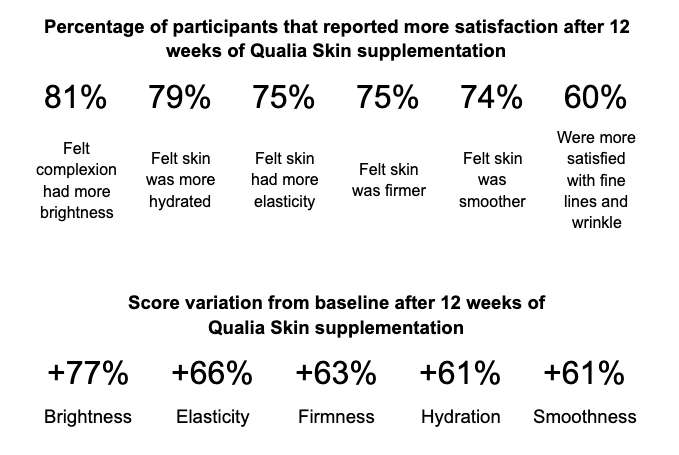 Ratings of the overall feelings of skin health, youthfulness, and satisfaction with skin appearance also changed in ways that indicated more satisfaction. This is, in our view, one of the most important results of this study. Greater satisfaction with how the skin feels and looks is, after all, an important reason why people put effort into taking care of their skin.

Figure 2 - Feeling of skin youthfulness and health at baseline and after 12 weeks of Qualia Skin supplementation. Note: In these charts, the “Agree” and “Disagree” slices include the “Strongly Agree” and “Strongly Disagree” ratings, respectively.

Figure 3 - Satisfaction with the overall appearance of the skin at baseline and after 12 weeks of Qualia Skin supplementation. Note: In these charts, the “Agree” and “Disagree” slices include the “Strongly Agree” and “Strongly Disagree” ratings, respectively.

Qualia Skin was conceived around the central tenet that healthier and prettier skin appearance would be an outcome of feeding the skin with complementary ingredients that support healthy skin physiology and function from the inside out.

To develop Qualia Skin, we took a systems approach to comprehensively support skin health and healthy skin aging: we wanted to offer a combination of ingredients that would collectively target multiple intersecting and complementary physiological processes and pathways important for the maintenance and support of healthy skin structure and function.

The results of this study support our hypothesis that Qualia Skin may promote a healthier and more youthful skin appearance by providing skin nourishment from within  and supporting comprehensive skin health and healthy skin aging.

You can learn more about the formulation process behind Qualia Skin in our article Qualia Skin - The Building of a Comprehensive Skin Support Stack.

Disclaimer: These results are preliminary, only represent the self-reported experiences of these participants, and may not be statistically significant.