The Science of Nootropic Stacks: Achieving a Whole System Upgrade 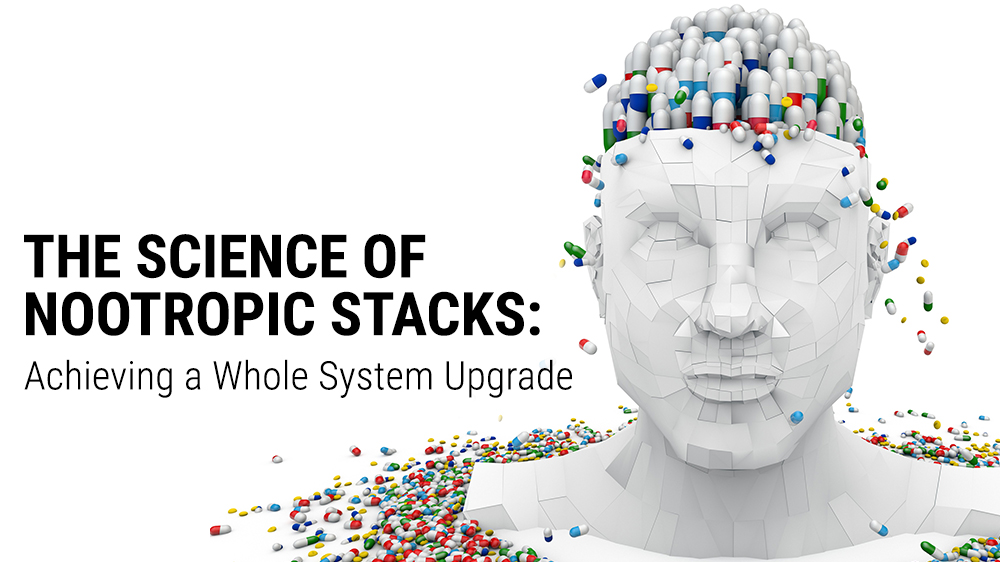 However, since the benefits of individual compounds are often mild, two or more ingredients are frequently combined into nootropic stacks to obtain better, stronger or longer effects. Nootropic stacking is common practice: an online nootropics survey showed that most users take stacks of several different chemicals daily. The best nootropic stacks are designed to take advantage of the synergy between ingredients — they can be combined to improve absorption, increase potency, potentiate benefits, or decrease side-effects. When nootropics are well combined, the improvement of the whole is greater than the sum of its parts.

One of the most popular examples of ingredient synergy is probably the caffeine and L-theanine stack. By itself, caffeine has a well-known stimulatory and productivity-enhancing outcome by promoting wakefulness, concentration, motivation, and alertness. However, caffeine can sometimes cause restlessness and anxiety. When combined with L-theanine, the productivity and creativity-enhancing benefits of caffeine are upregulated, but anxiety and jitteriness are counterbalanced by L-theanine’s capacity to promote relaxation without sedation. This synergy between caffeine and L-theanine makes them a widely sought-after nootropic stack for focus and productivity.

Another example is phenylethylamine, popularly known as the ‘love potion’. Phenylethylamine increases synaptic levels of dopamine, serotonin, and norepinephrine in the brain, improving mood, attention and concentration. However, since phenylethylamine is quickly metabolized by the enzyme monoamine oxidase-B (MAO-B), these benefits are observed only at high doses. But when phenylethylamine is stacked with MAO-B inhibitors, such as hordenine, its breakdown is delayed, allowing it to remain active for a longer period of time and to be beneficial at lower doses.

These examples show how the interaction between two ingredients can be explored to improve their benefits in a straightforward way. But the synergistic potential of nootropics can be explored with greater complexity, particularly when the mechanisms of action of each ingredient are well understood.

Just as cognition emerges from the concerted activity and intricate balance of multiple elements, so should all these elements be simultaneously optimized. Targeting pathways is, therefore, more likely to be beneficial than targeting a single chemical reaction. A good example is the cholinergic system. Choline supplements are among the most popular nootropics because choline is the precursor for the neurotransmitter acetylcholine.

Acetylcholine is involved in many key functions in the brain, particularly in memory and learning, in alertness, and in sustaining attention. An enhancement of cholinergic activity can be achieved by increasing the synaptic levels and the turnover of acetylcholine.

Choline supplementation with CDP-choline or alpha-GPC will increase the levels of choline in the brain, but the functional outcome will be restricted by the rate of choline uptake by neurons, where acetylcholine is synthesized. Stacking them with docosahexaenoic acid (DHA), for example, may increase their benefits because DHA, the main structural component of the neuronal cell membrane, facilitates the capacity of the high-affinity choline uptake system to transport choline into neurons, resulting in an increase in the availability of choline for acetylcholine synthesis.

When combined, these ingredients can, therefore, enhance cholinergic action through multiple, complementary and interdependent mechanisms. But the nootropic response of this combination can be further enhanced by ingredients that promote synaptic plasticity, the changes in synaptic strength that underlie learning and memory. A possible target is cAMP, a signaling molecule that acts as a messenger within the cell. The cAMP signaling pathway has been shown to regulate synaptic plasticity by increasing the release of neurotransmitters into the synapse, not only acetylcholine, but also glutamate and GABA. This action can be enhanced by forskolin, which increases intracellular levels of cAMP through the activation of adenylate cyclase, the enzyme that produces cAMP, leading to an increased responsiveness to extracellular stimuli.

There are nootropic stacks for energy, for focus, for memory, for studying, for motivation. These are great and serve a specific purpose. But a major appeal of nootropics is the potential for a sustained and long-lasting enhancement of cognitive function as a whole.

By enhancing a whole system, the right combination of ingredients is more likely to have a significant functional impact. Understanding the neuroscience of cognitive enhancement — the system, its processes and the response of nootropics on those processes — is a step forward in designing more complex and beneficial nootropic stacks. As our understanding of the brain advances, we’re more likely to find better ways to hack into these systems.