What is Acetylcholine? An Exploration of the Cholinergic system — Functions, Neurochemistry and Support 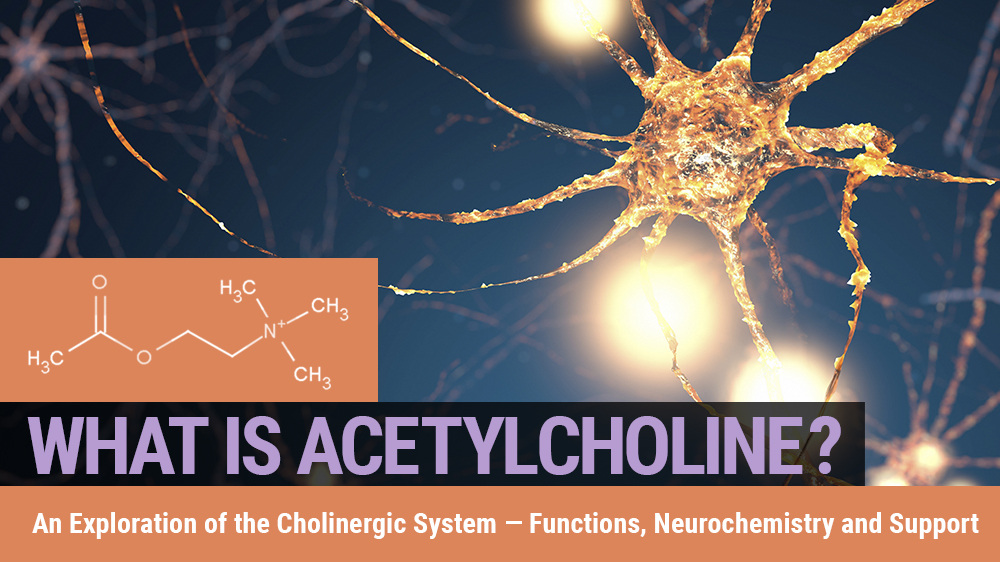 Key parts of choline-related signaling include: (1) augmenting the choline pool; (2) choosing choline sources and other nutrients that give full choline pathway support; (3) optimizing acetylcholine turnover (i.e., recycling and breakdown); and (4) supporting balanced signaling and neuroprotection. Supporting pathways and processes that overlap with choline-related signaling is the foundation of a great nootropic stack.* Without adequate levels of choline in the brain (and the ability to use it well), other nootropics are unlikely to work well.*

Acetylcholine is a neurotransmitter and neuromodulator (i.e., a messenger molecule released by nerve cells to signal and regulate other nerve cells). It plays important roles in cognitive function, most notably, in the neural mechanisms of memory.[1] In addition to this memory function, acetylcholine is involved in supporting alertness, attention, and learning. It is also responsible for the neuromuscular junction. It helps skeletal muscle contract and has many health benefits. It plays a huge part in the central nervous system, peripheral nervous system and autonomic nervous system.

What does Acetylcholine do?

Acetylcholine release supports and modulates different types of memory, from working memory to long-term memory, and different phases of memory, from memory formation to consolidation and retrieval. Cholinergic activation in brain areas associated with memory retention and consolidation, such as the hippocampus, the amygdala, and the cerebral cortex, is necessary for these memory processes to unfold.[2,3] Deficits in cholinergic function are a major feature of age-related declines in memory, with loss of cholinergic neurons (i.e., the nerve cells that make and release acetylcholine) and decreased ability to make acetylcholine contributing to the poorer memory and attention.[4]

Acetylcholine also promotes memory formation and consolidation by supporting hippocampal and cortical synaptic plasticity—the ability for strengthening or weakening of signaling between neurons over time to shape learning and memory. Acetylcholine can increase glutamatergic synaptic transmission and enhance the induction and the magnitude of the subset of plasticity called long-term potentiation (LTP).[5,6] LTP is the strengthening of synapses based on patterns of neuronal activity and a key cellular mechanism of memory and learning.

The cholinergic system also has an important modulatory effect on executive function, the set of higher-order cognitive processes that underlie our performance of goal-directed behaviors—impulse control, response inhibition, attention, working memory, cognitive flexibility, planning, judgment, and decision-making.[7,8] The cholinergic system regulates executive function either by direct action, or by modulating other neurotransmitter systems (e.g., dopamine, norepinephrine, and serotonin signaling). By increasing dopamine release in the prefrontal cortex, it supports task-shifting and attention. Acetylcholine mediates attentional focusing and filtering, which relate to selective attention processes. And it plays a role in the central visual processing necessary to perform any visual attentional task.[8,9]

Neurotransmitters have several characteristics in common. The first is that they are synthesized (i.e., made) in neurons. After that, they are moved into areas near the end of neurons (synaptic vesicles) where they are stored until needed. This occurs in preparation for signaling, which involves the release of the neurotransmitter from the message-sending neuron (presynaptic) into the space between neurons (synaptic cleft), so it can activate (i.e., bind to) receptors on message-receiving neurons (postsynaptic). After this signal is sent, the space between neurons needs to be cleaned up, so it can be made ready for the next time a message needs to be sent. This can be achieved by re-absorbing the neurotransmitter (i.e., reuptake) so it can be reused (recycling), and/or by degrading (inactivating) the neurotransmitter. Let’s explore how these occur with acetylcholine.

Acetylcholine is produced in nerve terminals of cholinergic neurons. This synthesis process uses the enzyme choline acetyltransferase (ChAT) to catalyze the transfer of the acetyl group from acetyl-coenzyme A (acetyl-CoA) to choline (choline synthesis will be discussed in the next section).[10] ChAT is the rate-limiting enzyme step (i.e., the slowest step in the pathway, so akin to a bottleneck) in acetylcholine synthesis.

[Note: Enzymes are catalysts used to produce specific biochemical reactions: They usually have names that end in “ase.” Coenzymes are parts of certain enzymes. Many coenzymes are derived from vitamins.]

CoA is synthesized from the essential nutrient vitamin B5 (pantothenic acid).[11] CoA is then acetylated to form acetyl-CoA, predominantly via the mitochondrial pyruvate dehydrogenase complex, and then translocated to the cytoplasm.

The pyruvate dehydrogenase complex consists of 3 enzymes that convert pyruvate (a key intermediate in several metabolic pathways) into acetyl-CoA—vitamins B1 (thiamin) and B3 (niacin) are needed for this complex.

The availability of both acetyl-CoA and choline are determinants of the rate of acetylcholine synthesis in the brain. Choline is taken up by cholinergic neurons from the extracellular fluid by the high-affinity choline uptake transporter (ChT) and accumulates in the synaptic terminal (where it can be combined with acetyl molecules).[10] The activity of ChT shows substantial plasticity and can be increased by the activation of cholinergic neurons.[12] 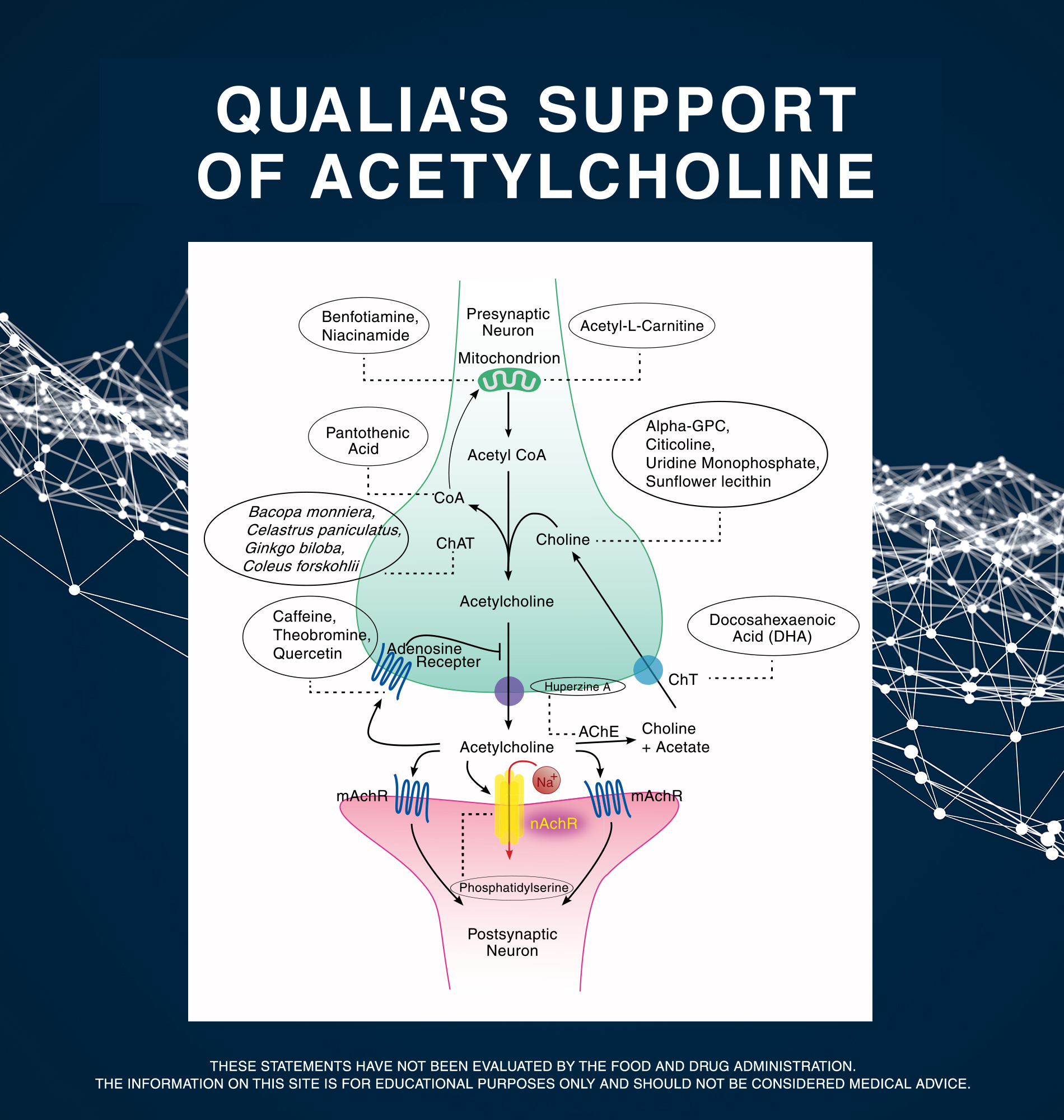 Both classes of acetylcholine receptors participate in the mechanisms of memory. Their activation by agonists—compounds that activate receptors to produce a biological response—can support memory formation, whereas the disruption of their activity by using antagonists —compounds that block the action of the agonist—can negatively affect short- and long-term memory consolidation and retrieval.[3,16]

The next phase of neurotransmission is cleanup. Signaling is based on relative changes, not absolute amounts. In a quiet room, the human ear might detect a whisper. In a loud nightclub, it might not hear a shout. Neurotransmitters work on a similar principle. Short bursts of acetylcholine produce responses. Between these bursts, the space between neurons is turned back into a quiet room by cleaning up the signaling molecules.

Acetylcholinesterase (AChE) enzyme activity plays a large role in acetylcholine signaling because it is the only way to empty the synaptic cleft of acetylcholine.

Acetylcholine synthesis is dependent on the availability of choline. The Institute of Medicine (IOM) has classified choline as an essential nutrient. While humans can make a small amount of choline in the liver, it’s primarily provided by the diet. Choline (and its metabolites) serve three main roles in the body. One of these is neurotransmission (as acetylcholine). Another is its use in cell membrane structure and signaling (as phosphatidylcholine). And the third is its use in methylation pathways (as trimethylglycine).

The main fate of dietary choline is the synthesis of phosphatidylcholine. This occurs via the cytidine diphosphate-choline (CDP-choline) pathway (or Kennedy pathway).[17] Phosphatidylcholine accounts for around 95% of the total choline pool in most tissues. The remaining 5% includes free choline, phosphocholine, glycerophosphocholine (GPC), CDP-choline, and acetylcholine, as well as other choline-containing phospholipids.

In the CDP-choline pathway, choline is initially converted into phosphocholine by choline kinase (CK), using ATP (the energy currency of cells) as a phosphate donor. Magnesium is a cofactor for this enzyme reaction. Next comes the rate-limiting step of the pathway. An enzyme called CTP: phosphocholine cytidylyltransferase (CCT) uses cytidine triphosphate (CTP) to convert phosphocholine into CDP­-choline (also known as Citicoline). The CTP used in this step is synthesized from uridine triphosphate, which is produced by phosphorylation of uridine monophosphate. In the last step in the pathway, CDP­-choline is esterified with diacylglycerol (DAG) by cholinephosphotransferase (also called choline/ethanolamine-phosphotransferase [CEPT]) to produce phosphatidylcholine.[17] Essential fatty acids (e.g. eicosapentaenoic acid (EPA) and docosahexaenoic acid (DHA)) are involved in the creation of DAG. 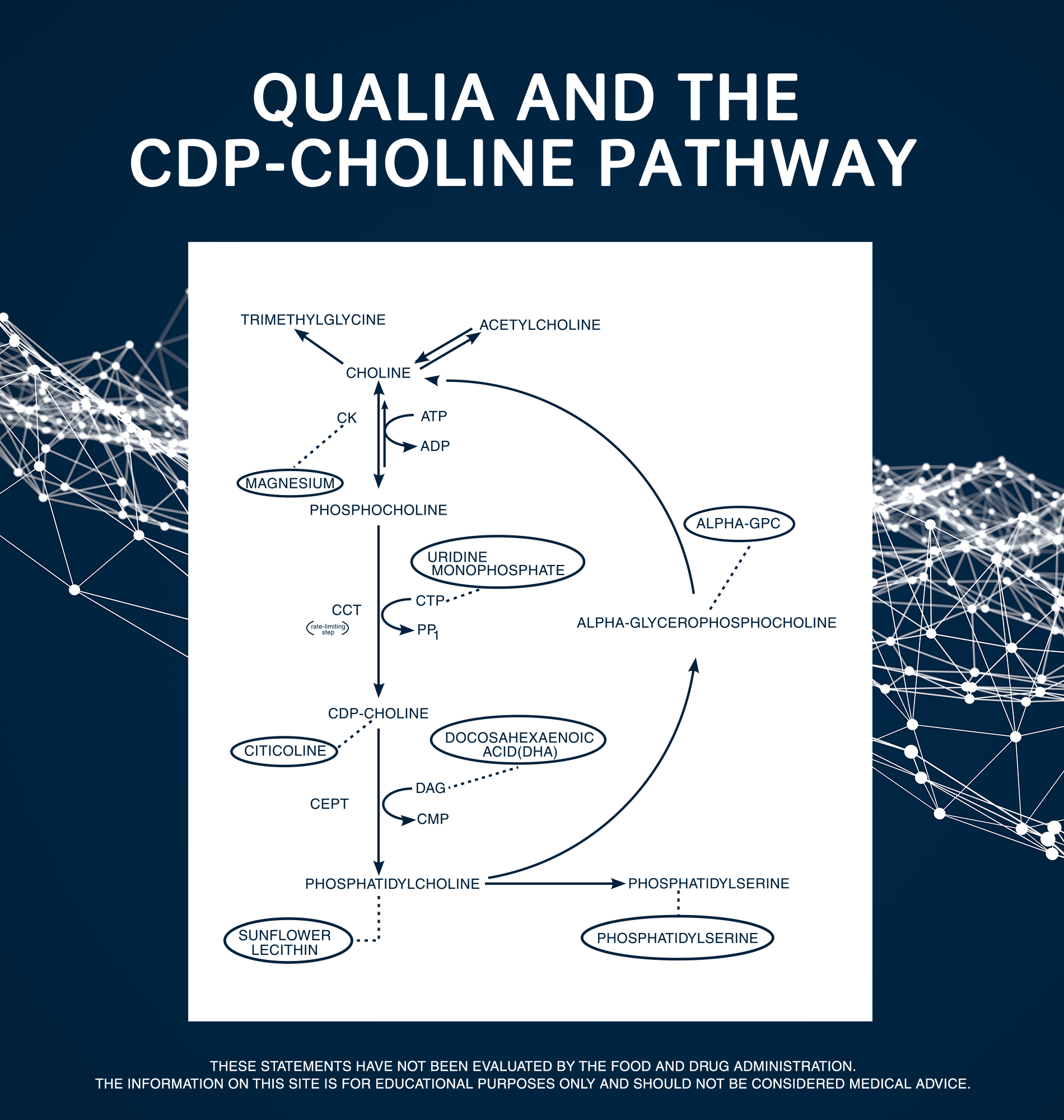 A key point is that choline balance is determined by supply and utilization. The phosphatidylcholine and acetylcholine pathways sit at the crossroads, being involved in the recycling/redistribution of choline. When choline balance is insufficient to meet demands, flows of choline-related molecules through these pathways are regulated in manners that attempt to restore the needed levels of choline and its metabolites, particularly in the liver and brain.[19] Because acetylcholine synthesis is highly dependent on choline balance, it can be enhanced by increasing plasma choline levels.[20]

While the brain (and body) will attempt to do the best with available resources, inadequate choline availability is a “Robbing Peter to Pay Paul” scenario, where one choline pathway can be relatively neglected to meet the needs of another. Increasing choline availability can solve this issue.

Alpha-glycerophosphocholine (Alpha-GPC), CDP-Choline (or Citicoline), and Uridine Monophosphate support the goals of augmenting choline pools and providing full pathway support. They have different entry points in the CDP-choline (or Kennedy) pathway, which has a central role in choline homeostasis.[19] Choline in the Alpha-GPC form enters and augments the choline pool after phosphatidylcholine. Since enzyme reactions in the choline pathways tend to be bidirectional (i.e., they can flow in either direction), increased availability of this intermediate, may allow phosphatidylcholine to be used for other purposes (rather than being broken down to augment choline pools).* CDP-Choline is the choline intermediate formed after the rate-limiting step in the CDP-choline pathway. Choline in this form bypasses the bottleneck and supplies choline one step away from the final product in the CDP-choline pathway—phosphatidylcholine.* Uridine Monophosphate is used to make the CTP molecule used as a substrate in the rate-limiting step. Oral Uridine Monophosphate can increase the brain levels of CDP-choline, so is an indirect (i.e., non-choline) way to support the pathway.*

Given the different pharmacokinetics (i.e., absorption and metabolism) and different places these ingredients interact with choline pathways, including Alpha-GPC, CDP-choline, and Uridine Monophosphate for choline signaling support allows for the upregulation of the Kennedy pathway and an increased turnover of the choline/phosphatidylcholine cycle, ultimately producing a higher availability of choline for acetylcholine synthesis.*

Increased levels of choline are part of the upregulation, but acetylcholine synthesis also requires the availability of acetyl groups. Vitamin B5 (Pantothenic Acid) is used as a cofactor in CoA synthesis,[11] so it contributes to the formation of acetyl-CoA.* In vitro evidence suggests that acetyl groups from compounds such as Acetyl-L-Carnitine or N-Acetyl-L-Tyrosine might contribute to acetylcholine synthesis.*[26]

Choline signaling is a big part of our body clock’s daytime neurochemistry. It promotes alert wakefulness. The flip side is sleep. Pathways and enzymes that augment wakefulness (and oppose sleepiness) can indirectly influence choline signaling.

Cholinergic signaling might also be enhanced by other mechanisms. For example, adenosine (a sleep-inducing factor) is a neuromodulator that decreases cholinergic activity.[32] Blocking adenosine receptors with antagonist molecules can counter adenosine’s effects, resulting in increased activity of acetylcholine. Caffeine is a non-selective and high-affinity adenosine receptor antagonist (wakefulness-promoting activity of coffee is believed to be related to this effect) and might indirectly enhance cholinergic activity.*[32,33] Theobromine (a compound found in chocolate) is also an adenosine receptor antagonist, albeit with lower affinity, slower onset, and longer duration of effects than caffeine.*[33,34]

Other ingredients that support aspects of choline signaling include:

(1) Vitamin B1 (Thiamin) and Vitamin B3 (Niacinamide) are used in the pyruvate dehydrogenase complex that produces acetyl-CoA;[35]

(2) Ginkgo biloba (a neuroadaptogen) appears to have protective and regulatory effects on aspects of acetylcholine signaling;*[36,37]

(3) Huperzine A (a nootropic compound) has improved acetylcholine levels in animal and human studies and influences cholinesterase enzyme activity.*[38-40]

Why Should You Support Choline Pathways and Processes?

The brain relies on choline for production of (1) phosphatidylcholine, needed for cell membrane structure and signaling, and (2) acetylcholine, a neurotransmitter used in processes underlying in memory and attention. Because of these and other roles, choline signaling is critical for brain development, memory,  and cognitive performance.

Choline is an essential nutrient. It's possible to meet typical needs through a great diet, but research on choline suggests that actual needs can exceed what diet provides in circumstances such as pregnancy and aging. Research also suggests that augmenting the choline pool can have positive effects on attention and memory.*[41] While choline nootropic compounds play an important part, other compounds (vitamin and mineral cofactors, neurolipid compounds, etc.) also play roles in acetylcholine signaling. When combined, these ingredients can synergistically enhance cholinergic action through multiple, complementary, and interdependent mechanisms. The brain will do its best to regulate choline pools and pathways to meet demands. It has tremendous capabilities to adapt, but these capabilities are not infinite. If forced to, it will rob Peter to pay Paul. The goal is to do our best to support it, so it does not have to make this type of trade-off.