What Is Oxidative Phosphorylation?

How Cells Use NAD to Make Energy (ATP) 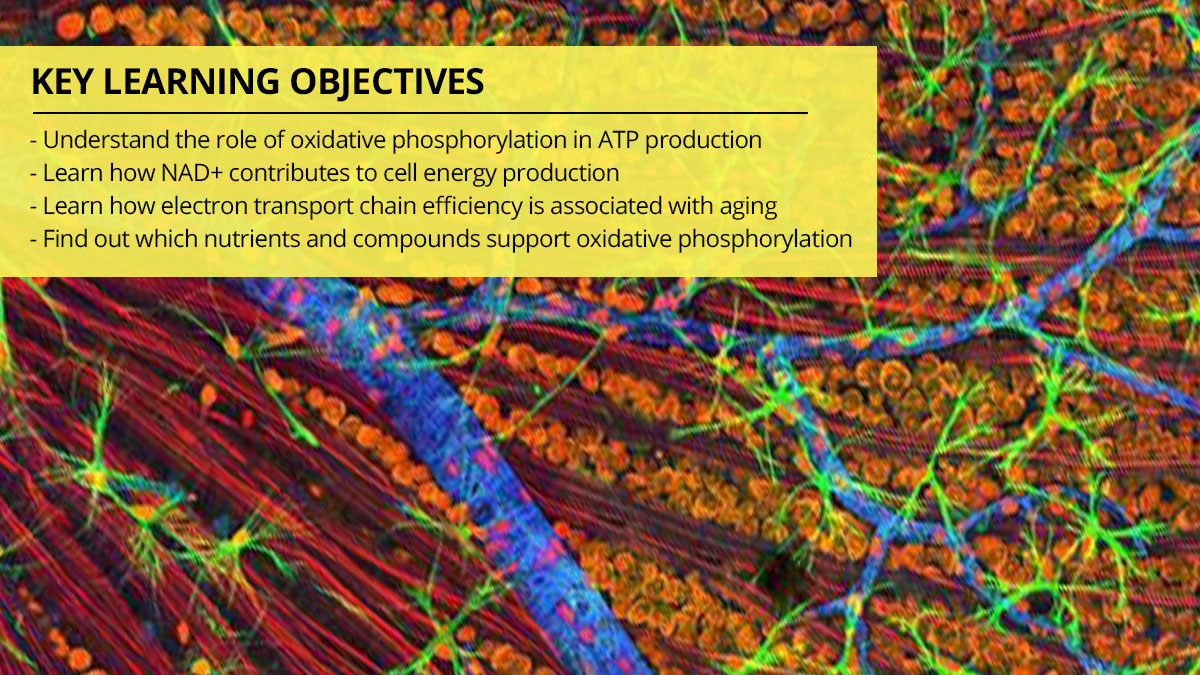 Understand the role of oxidative phosphorylation in ATP production

Learn how electron transport chain efficiency is associated with aging

Find out which nutrients and compounds support oxidative phosphorylation

What Is Oxidative Phosphorylation?

Oxidative phosphorylation (OXPHOS) is the major pathway of ATP production. OXPHOS occurs in mitochondria and is responsible for producing the majority of ATP that cells use for chemical energy. OXPHOS uses energy extracted in the metabolism of cellular fuels, particularly in glycolysis, fatty acid oxidation, and the citric acid cycle, to power the production of ATP.

ATP—adenosine triphosphate—is an energy-rich molecule that can be used to power cellular processes that require energy input, such as muscle contraction, cellular movements, transport of molecules and ions, and synthesis of macromolecules from simpler precursors.

Glycolysis, fatty acid oxidation, and citric acid cycle break down sugars and fats, gaining a small amount of ATP in the process. This has come at the cost of switching a number of NAD+ molecules to NADH. OXPHOS is where the NADH gets put to good use. Each NADH molecule carries the potential to produce three molecules of ATP when it’s fed into OXPHOS. In the process of producing the ATP, the NADH is converted back to NAD+. This regeneration of NAD+ helps cells to maintain a higher NAD+/NADH ratio, which plays an important role in healthy aging.

OXPHOS moves through five steps (usually referred to as complex I, complex II, … complex V). Each complex uses an enzyme, with the final one—ATP synthase (complex V)—producing ATP. This is why ATP is thought of as being the final result of OXPHOS. So, let's learn a bit more about ATP.

ATP consists of adenine (which is also part of DNA), ribose (a type of sugar), and a triphosphate unit (i.e., three phosphate groups, made up of phosphorus and oxygen). ATP is an energy-rich molecule because it contains energy-rich chemical bonds between its phosphate groups that release a lot of free energy when they are broken (hydrolyzed)[1,2].

It is the energy released when ATP is hydrolyzed to ADP (the diphosphate version) and, to a lesser extent, AMP, (the monophosphate version) that is used to drive all sorts of cellular processes that are energetically unfavorable and thus require energy input.

ATP is used by cells at an incredibly fast rate, but because the cellular pool of ATP is limited, cells need to continually regenerate it from ADP in order to keep powering all the cellular processes that require it. In general, each ATP molecule is consumed within a minute of its synthesis and it’s estimated that each ATP molecule is recycled around 300 times a day.

This constant use and recycling means that ATP serves as an immediate donor of free energy but not as a long-term energy store. Long-term energy storage is achieved by the synthesis of energy-rich complex macromolecules that act as fuel reservoirs and use ATP for their synthesis. These include glycogen (the glucose store) and triglycerides (the fatty acids store), which can be broken down to regenerate ATP whenever cells aren’t getting enough fuel from food.

ATP regeneration from ADP is also a process that requires energy. But in this case, the energy comes from electrons extracted in the oxidation of metabolic fuels, of which glucose and fatty acids are the most important. Remember that oxidation refers to the loss of electrons by a molecule, the opposite of reduction, the gain of electrons. Chemical reactions in which electrons are transferred from one molecule (which is oxidized) to another (which is reduced) are called redox reactions (from reduction + oxidation)[1,2].

The constant recycling and regeneration of the ATP molecule results in approximately our body weight of ATP being used every day.

Where Does Oxidative Phosphorylation Occur?

OXPHOS takes place in mitochondria. Although some ATP is produced in glycolysis and the citric acid cycle by substrate-level phosphorylation, which uses the chemical energy released by the conversion of a higher energy substrate into a lower energy product to power ATP production, it’s through OXPHOS that the bulk of ATP synthesis occurs.

As we saw in the previous articles of this series, the electrons extracted in glycolysis, fatty acid oxidation, and the citric acid cycle are transported by two carriers: NAD+ (nicotinamide adenine dinucleotide, derived from niacin, vitamin B3) and FAD+ (flavin adenine dinucleotide, derived from riboflavin, vitamin B2). NAD+ (the oxidized form) accepts two electrons and a hydrogen ion and becomes NADH (the reduced form); FAD+ (the oxidized form) accepts two electrons and two hydrogen ions and becomes FADH2 (the reduced form)[1,2]. These two molecules—NADH and FADH2—act as electron carriers. And it is the electrons they carry that are, in effect, the fuel that drives OXPHOS.

The electrons carried by NADH and FADH2 are transferred to a set of mitochondrial membrane proteins called the electron transport chain (ETC). In the ETC, electrons are transferred in a series of redox reactions to oxygen (O2), which is converted into water (H2O) by binding hydrogen (H+) after receiving electrons. It’s the energy of this electron transfer through the ETC to oxygen that powers the synthesis of ATP from ADP.

Mitochondria are known as “the powerhouse of the cell” because they are where the vast majority of ATP is produced. But most of this ATP production occurs in very specific structures within mitochondria. Mitochondria have outer and inner membranes. The ETC is located in the inner membrane. The inner mitochondrial membrane has a large number of infoldings, or cristae, that increase its surface area, and consequently, the amount of ETC clusters available for ATP production[1].

Having a greater abundance, or density of cristae allows for more capacity for ATP generation. Unfortunately, there can be a loss of cristae that accompanies aging and health declines[3–5]. Cocoa extracts, specifically extracts rich in cocoa flavanols, may support enhanced cristae abundance[4,6,7]. This is a primary reason we include a Cocoa Seed Extract standardized for cocoa flavanols in Qualia Life (previously called Eternus).

Most ATP is produced in the inner folds of mitochondrial membranes called cristae. Having a greater abundance of cristae allows cells to produce more energy.

The ETC uses the energy produced by the electron flow to pump protons (H+) out of the mitochondrial matrix. This creates an unequal distribution of H+ across the membrane (a proton gradient) that generates a transmembrane electrochemical potential. This electrochemical potential creates a proton-motive force when H+ ions flow back into the matrix through an enzyme called ATP synthase (also called complex V) that is used to drive the phosphorylation of ADP to ATP. Because ATP production is a process that adds a phosphate molecule to (i.e., phosphorylates) ADP using energy generated by the oxidation of fuels, this gives rise to the name this process is known by, oxidative phosphorylation (OXPHOS).

Qualia Life supports the reactions of the ETC and OXPHOS by supplying precursors for enzyme cofactors and substrates. These include Vitamin B3 as Niacinamide and Nicotinic acid[8], Vitamin B2 as Riboflavin[9], Coenzyme Q10 as Ubiquinone[10], Vitamin K2 as Menaquinone-7 (which supplies complex III cofactors/substrates)[11–13], and Magnesium (cofactor in ATP synthesis)[14].

The electron transport chain uses the energy produced by the electron flow power the synthesis of ATP.

Why Is Oxidative Phosphorylation So Important for ATP Production?

As a whole, the process of electron extraction from carbon fuels and ATP synthesis by glycolysis, fatty acid oxidation, the citric acid cycle, and OXPHOS is called cellular respiration. This entire process converts the energy of the chemical bonds of dietary nutrients into cellular energy. But it’s the last stage of this process, OXPHOS, that allows for the total process to efficiently produce large quantities of chemical energy, as ATP, from food.

We’ll use a glucose molecule to get a sense of the contribution of OXPHOS to total ATP production. Biology textbooks often state that 38 ATP molecules can be made per oxidized glucose molecule during cellular respiration. Two of these ATP molecules are produced during glycolysis, two ATP (or GTP instead) can be produced in the citric acid cycle, but up to 34 ATP are the result of OXPHOS. OXPHOS gets most of the ATP credit for high ATP producing capacity. But it is the investment in future ATP production that takes place during glycolysis and the citric acid cycle that allows the ATP payoff to occur in OXPHOS. This investment occurs as a result of the action of NAD+ and FAD+.

While only four ATP molecules are produced per glucose molecule by substrate-level phosphorylation in glycolysis and the citric acid cycle, full oxidation of the glucose molecule also produces 10 NADH (starting from 10 NAD+) and 2 FADH2 (from FAD+). This investment in NADH and FADH2 molecules will yield 25 ATP from NADH and 3 from FADH2 though OXPHOS.

In theory, each molecule of NADH fed into OXPHOS would produce three molecules of ATP, while each FADH2 would produce two ATP. In practice mitochondria produce less than this theoretical amount because mitochondrial membranes aren’t perfectly efficient, resulting in what’s described as “mild uncoupling” (i.e., some of the electrons carried by NADH and FADH2 are not used to drive ATP synthesis). So in practice, each NADH generates enough energy on the ETC to yield, on average, 2.5 ATP molecules, whereas each FADH2 yields 1.5 ATP molecules[1,2].

The 10 NADH and 2 FADH2 molecules produced during the metabolism of a single glucose molecule, when fed into the electron transport chain create up to 34 ATPs. This is a huge amount compared to the maximum of 4 ATP produced from that same glucose molecule by glycolysis and the citric acid cycle.

An adequate balance between NAD+ and NADH—the NAD+/NADH ratio—is fundamental for the efficiency of energy metabolism. The four core metabolic processes—glycolysis, beta-oxidation, citric acid cycle, OXPHOS—flow optimally when the NAD+/NADH ratio is high (i.e., there is much more NAD+ than NADH in the cell). Therefore, the maintenance of this ratio is critical for mitochondrial and cellular function.

Qualia Life contains a set of ingredients that support an upregulation of NAD+ levels, and consequently, an elevation of the NAD+/NADH. Qualia Life supplies the metabolic precursor for NAD+ synthesis, Vitamin B3 as Niacinamide and Nicotinic acid[15], as well as L-Tryptophan, a substrate for NAD+ synthesis[16], and Vitamin B6 as Pyridoxal-5’-Phosphate, a cofactor in the synthesis of NAD+ from L-tryptophan[16]. Furthermore, Qualia Life contains ingredients that support the NAD+ pool in cells. These include Grape Proanthocyanidins (from BioVin® French Red Grapes Extract)[17], Resveratrol (from BioVin® French Red Grapes Extract)[18–20], Coenzyme Q10 as Ubiquinone[21], and Lipoic Acid[22,23].

What Happens To Oxidative Phosphorylation During Aging?

Not all oxygen is converted into water in the ETC. Mitochondria also generate reactive oxygen species (ROS) as metabolic byproducts of energy metabolism. At adequate levels, ROS are important signaling molecules, but they have detrimental effects when they are produced in excess. ROS accumulation causes damage to molecules and cell structures, which is known as oxidative stress[24].

Mitochondrial dysfunction caused by oxidative stress is one of the hallmarks of aging[24]. It affects the production and function of enzymes of the ETC essential for ATP generation and decreases the efficiency of cellular respiration. When the ETC loses efficiency, the production of ROS increases, which creates a vicious cycle of damage and dysfunction[25]. It is estimated that the ATP-producing capacity declines on average 8% per decade of life.

Together, the age-related decrease in ATP synthesis and increase in ROS production can have a significant impact on cellular function, promoting the progression of molecular and cellular impairments and cellular senescence.

Age-related losses in ETC efficiency impair the mitochondrial ATP-producing capacity, increase the production of ROS, and contribute to mitochondrial dysfunction and cellular senescence.

What Nutrients and Compounds Can Support Efficient Oxidative Phosphorylation?

Optimizing the efficiency of the ETC may support cellular respiration and the ATP-producing capacity of cells, leading to a downregulation of ROS production and potentially contributing to a deceleration of natural cellular senescence processes.